When your SharePoint Framework solution doesn’t work as expected in production, the ability to debug it right there, in the production tenant, will save you a lot of time.

When building SharePoint Framework solutions, the toolchain allows you to build the solution in the debug or release (also known as ship) mode.

Solution built in the debug mode contains unoptimized versions of scripts. While the SharePoint Framework toolchain combines all files into a single bundle, the bundle contents are still quite readable by a human being.

The name says it all: debug. The debug version of your solution is meant for debugging. It’s not optimized, but it doesn’t have to be. It’s intended to be running only on your local machine. 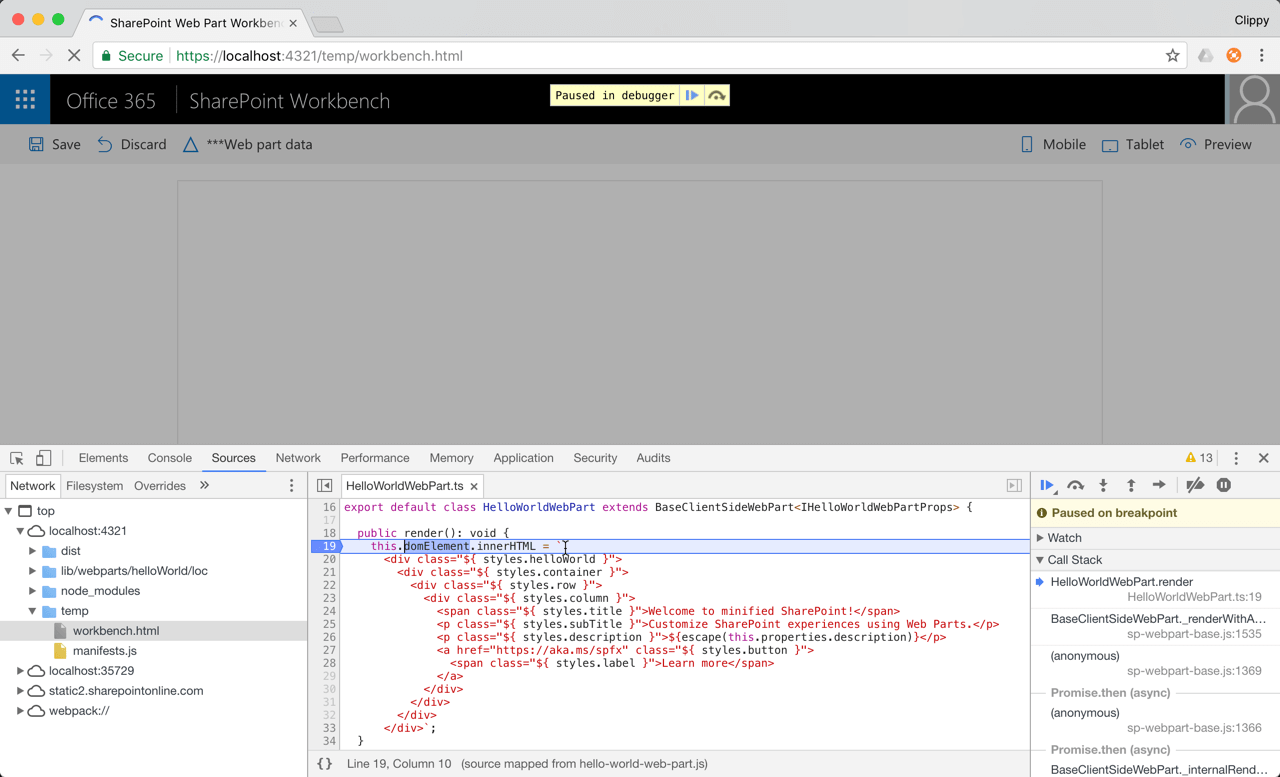 When you build your solution in the release mode, the main purpose is to optimize it for running in production. One part of the optimaztion is to remove everything that’s unnecessary. Additionally, the generated code is minified to minimize the amount of data that the browser needs to load. While the browser can process the code just fine, it’s hard for you to make any sense of it. 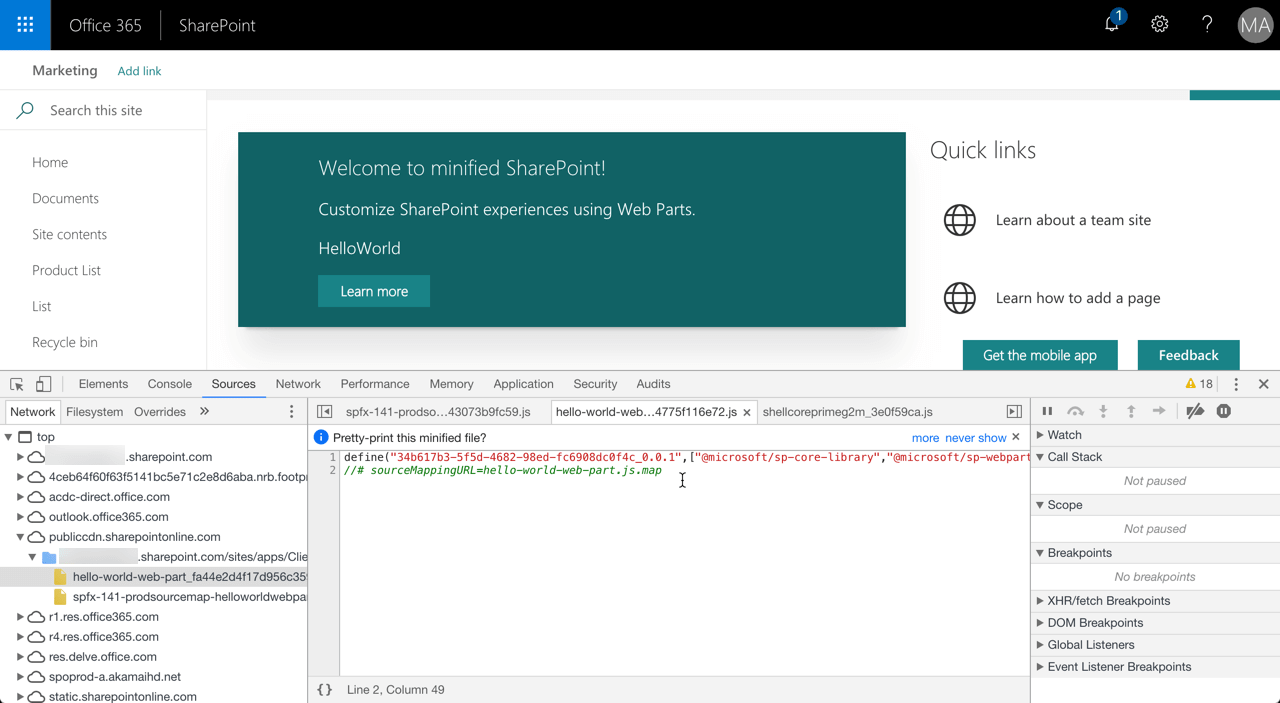 Despite the best intentions and testing, sometimes things break in production. And when you try to debug a production version of your SharePoint Framework solution, you will have little luck. Even though the browser will help you prettify the source code, it will be difficult for you to make sense of it, not to mention to map it to your original code.

But did you know, that with a bit of planning ahead and a few modifications, you can debug your production code, just as if you did on your local dev machine?

By default, the SharePoint Framework toolchain builds source maps only in debug mode. With a small change to the build process, you can have it build source maps for the production version of your solution too.

In the code editor, open the gulpfile.js file and change its contents to:

First, add the reference to webpack (line 5). Next, instruct webpack to build source maps (line 10). Because the code is minified using the UglifyJs webpack plugin, you also have to instruct the plugin to generate source maps. To do this, get the reference to the plugin from the current configuration and set the sourceMapoption to true (lines 12-18).

The next time you build your project in release mode, The dist folder will contain not only the bundle and the manifest but also the the source map.

If you package your project in release mode, the SharePoint Framework toolchain won’t include the source map in the generated package. And that’s a good thing. The source map contains the original code which most likely you don’t want to share. But if you want to be able to debug your code in production, it’s important, that you store the generated source map somewhere.

Load the source map for your code running in production

When generating source maps for your production code, the SharePoint Framework toolchain included a reference to the source map at the end of the generated bundle file.

While you could have your source maps stored somewhere on a public URL, you are more likely to have it available on your developer machine. The easiest way I found to serve files from a local machine is by using the http-server. After installing it using npm by executing npm i -g http-server, change the working directory to where your source map is stored, and execute http-server. http-server will start a local web server with all the files from the directory available via a localhost URL.

Load the source map in the browser

Now that the source is accessible via a URL, copy that URL to the clipboard. Next, navigate to the SharePoint page where the web part that you want to debug is located. Open the web browser’s developer tools, and in the list of loaded scripts, locate the bundle file where the web part is defined. 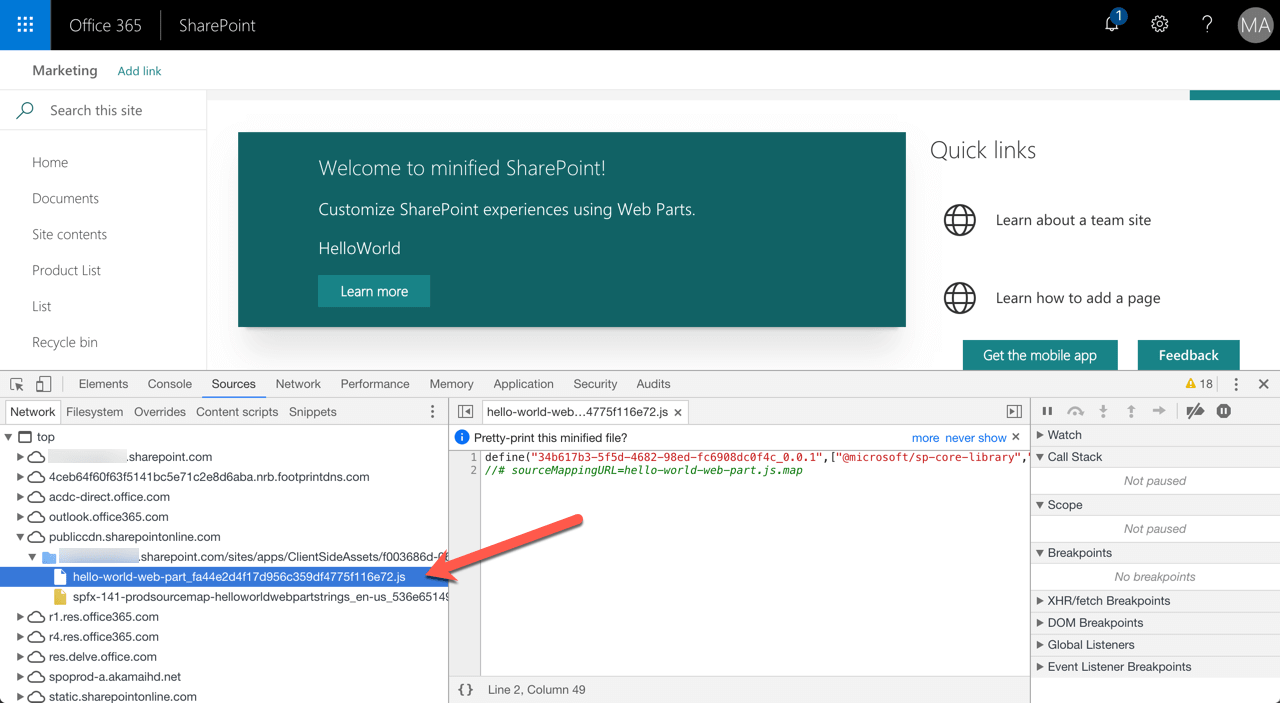 Next, just before the define keyword, place a breakpoint. 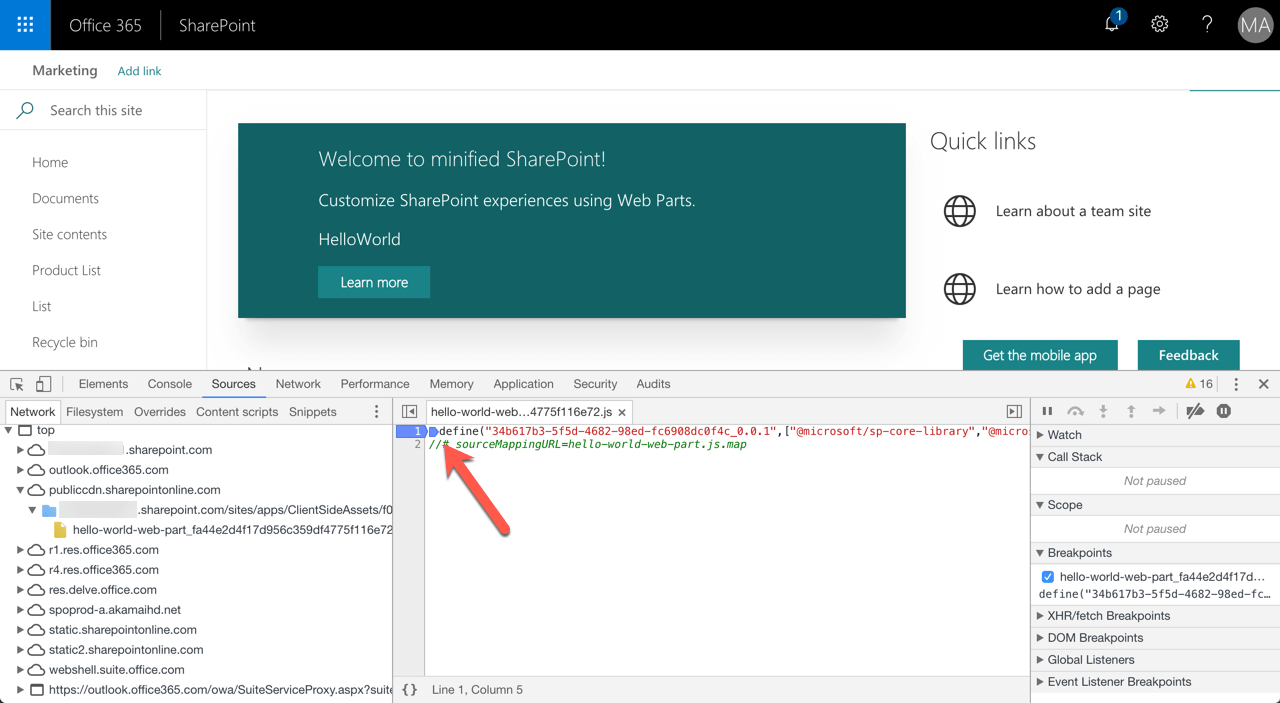 This is necessary, so that you can load the source map before the web part’s code is executed. This will allow you to debug its complete lifecycle.

Next, reload the page. The developer tools will stop at the breakpoint you have just enabled. Then, in the same window where you set the breakpoint, click right, and from the context menu choose Add source map…. 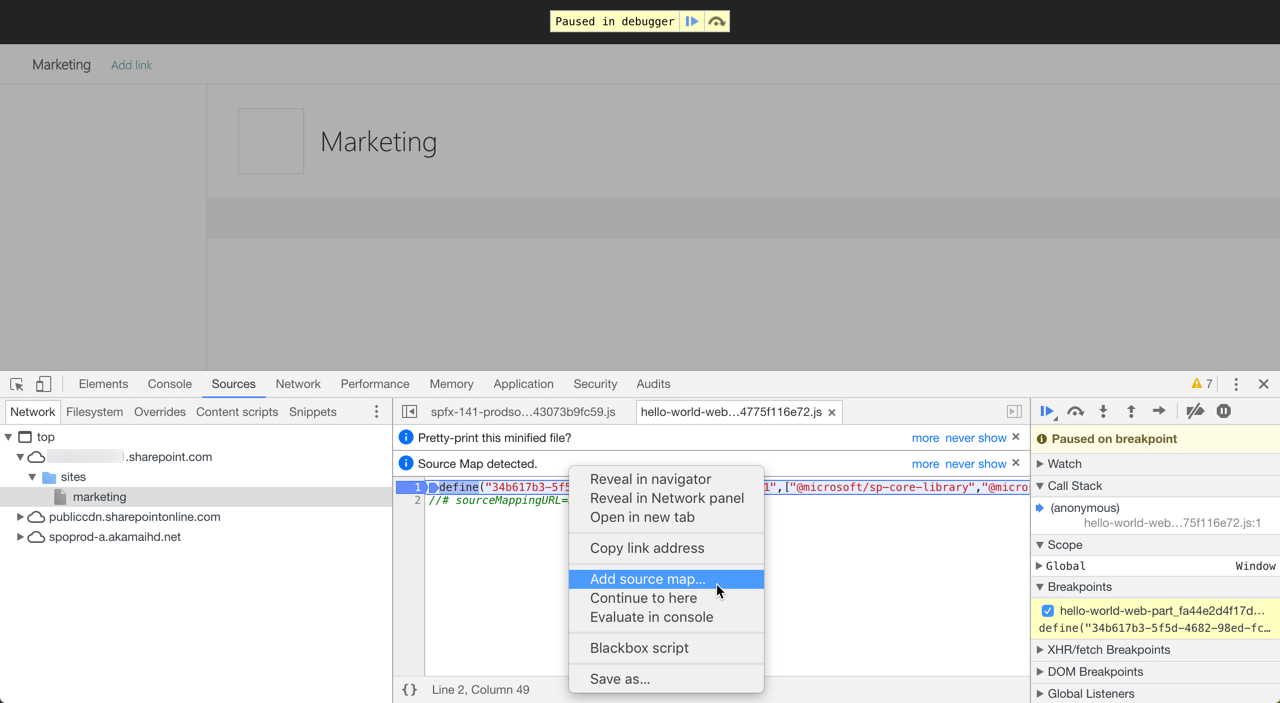 In the dialog window, paste the source map URL you copied previously, and click the Add button.

The browser will load the source map and on the Network tab, you will now see a new entry named webpack://. Navigate to webpack://../../ where you should see a folder named ../../src/webparts/helloWorld which contains the original TypeScript file you created. 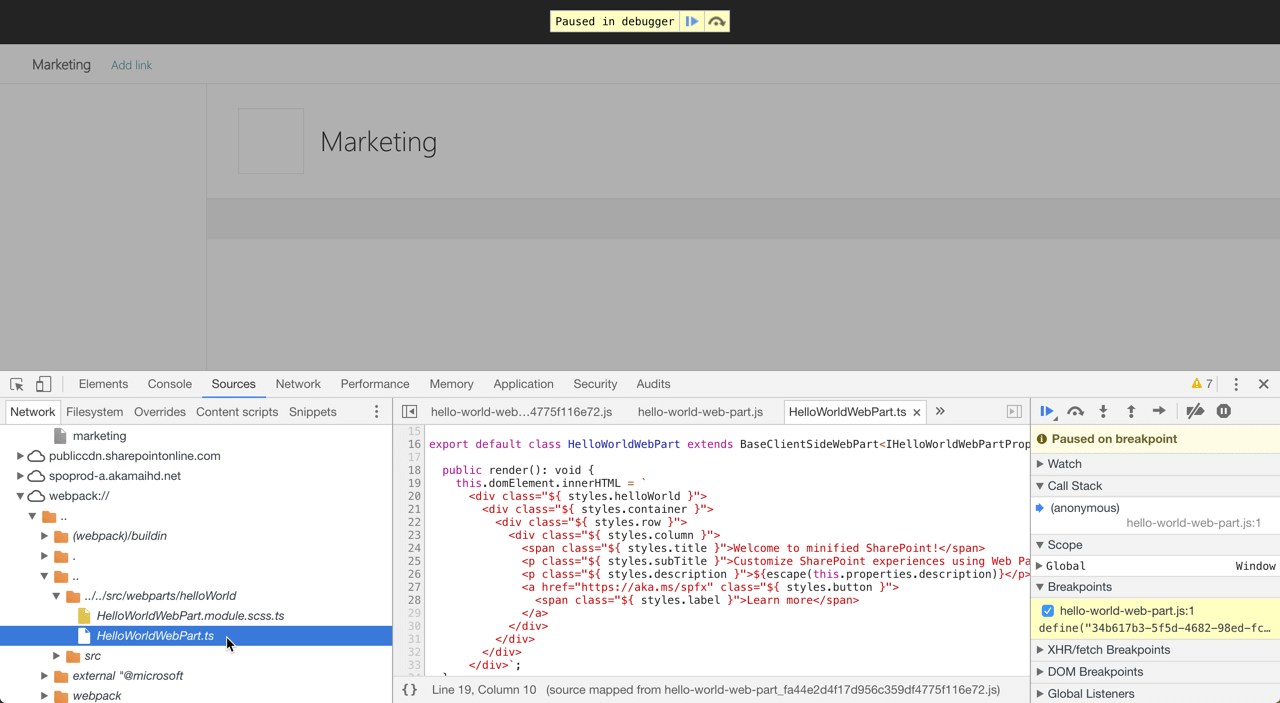 After opening the TypeScript file, you will be able to put a breakpoint anywhere in your original TypeScript code! 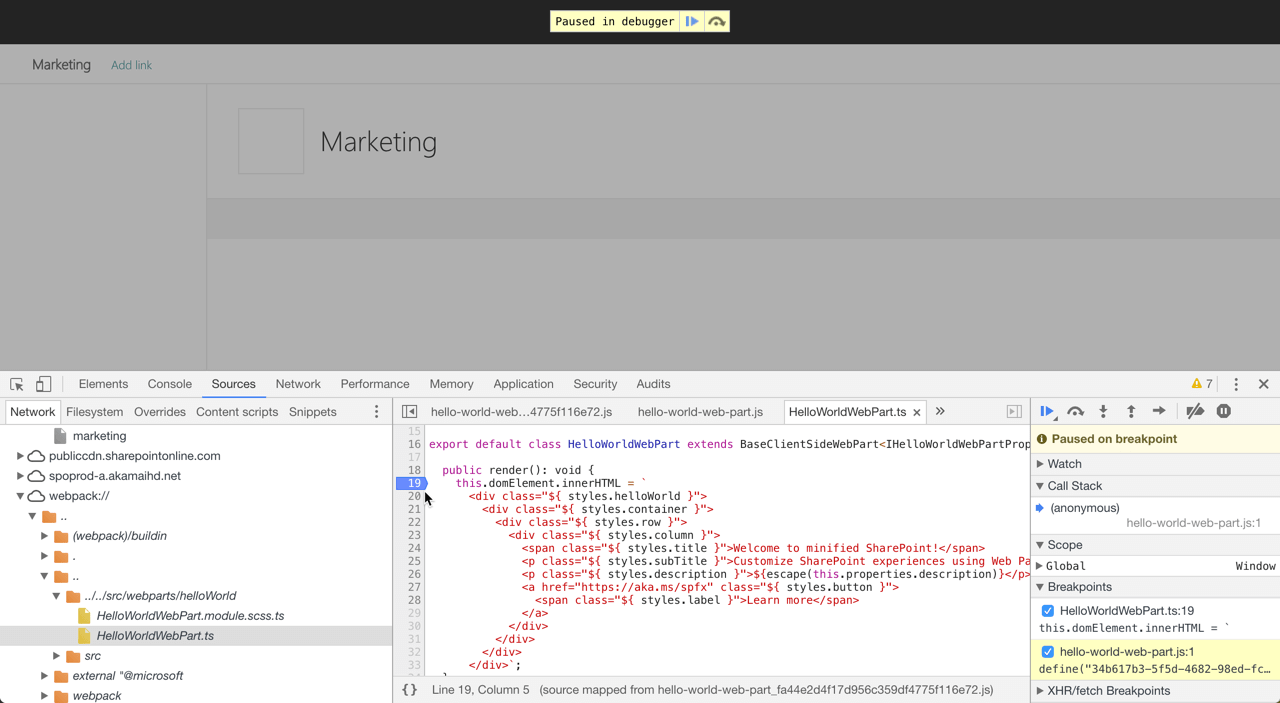 Once you resume loading the page, the browser will stop at the breakpoint you set, allowing you to step through the TypeScript code that you originally wrote. And all that while running in production!

This blog was originally posted on Waldek’s blog

You can now use Rencore’s SaaS tool AnalysisCloud to automatically discover what type of customizations are live in your SharePoint Online tenant. Knowing about which customizations are deployed by IT, citizen developers or business users enables you to implement a customization governance plan based on your organization’s needs and challenges.

Click the button below and try AnalysisCloud for free!

Waldek is a Microsoft Office Development MVP and Head of Product at Rencore. He reinforces our product development adding loads of business experience from working as a SharePoint consultant for more than 10 years. Waldek is passionate about what he does and shares his enthusiasm through his blog and as a regular speaker at conferences and community events all over Europe. Recently, Waldek joined the SharePoint Patterns and Practices (PnP) Core Team to help developers make better use of the SharePoint and Office 365 platforms.

Copyright © 2020 Rencore GmbH. All Rights Reserved
We use cookies to ensure that we give you the best experience on our website. If you continue to use this site we will assume that you are happy with it.Ok