I wrote yesterday a recap of the announcements from Microsoft’s Build 2017 day 1 keynote. You can read it here and it focuses more on Microsoft Azure and developer announcements.

Tonight is the time for a more Windows and platform focused keynote. Expect news on Windows 10 updates, devices and Universal Windows Apps.

Windows 10 Fall Creators Update is big, as it was a major push from Microsoft in terms of future features and capabilities. Less so for end users. 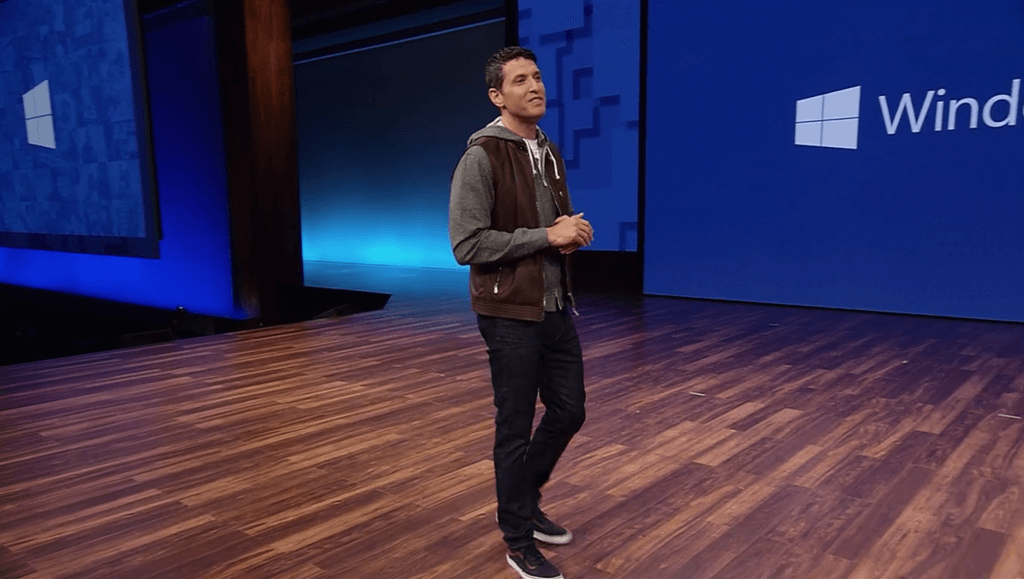 Windows 10 Fall Creators Update was listed and mentioned as one of the three key themes. 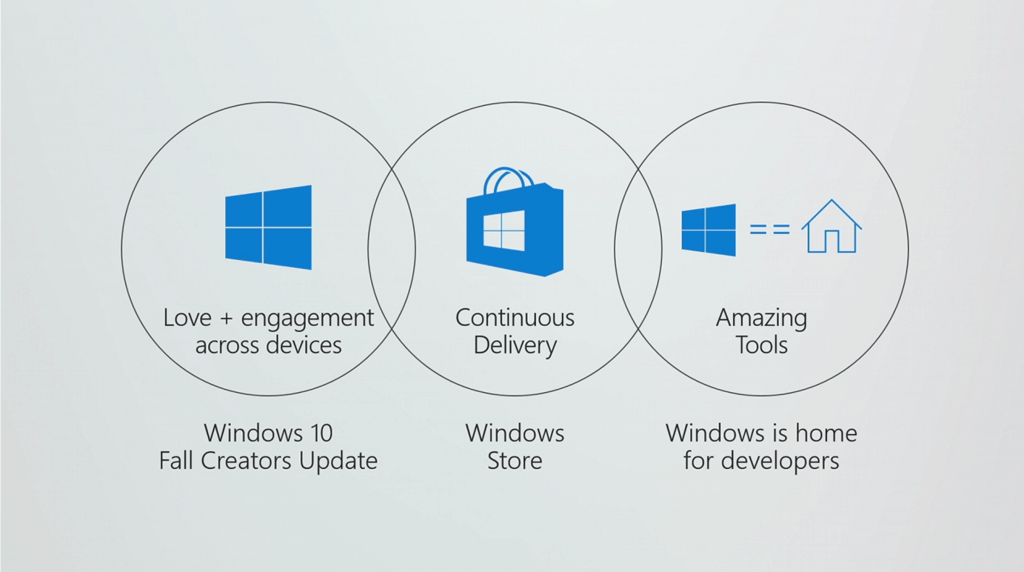 Second theme is Windows Store, and the third theme seems to be that Windows is a viable platform for developers. I think this implies also that Universal Windows Platform (UWP) is still very much in the game. Personally I’m very much tempted to hopefully in the Universal Windows Apps as a user, and I’m hoping I get a chance to work with a Surface Laptop and Windows 10 S to see how easy or challenging it would be.

Windows Story Remix is an app that allows users to edit videos with context. It’s like remix for PowerPoint, but instead of slides it’s for video and music. Looks very Apple’ish, with a simple interface and zero knowledge needed for video editing. Fun, but hardly professional. The special effects looked amazing but I do remind myself from time to time, that so did HoloLens when it was on stage for the first time. 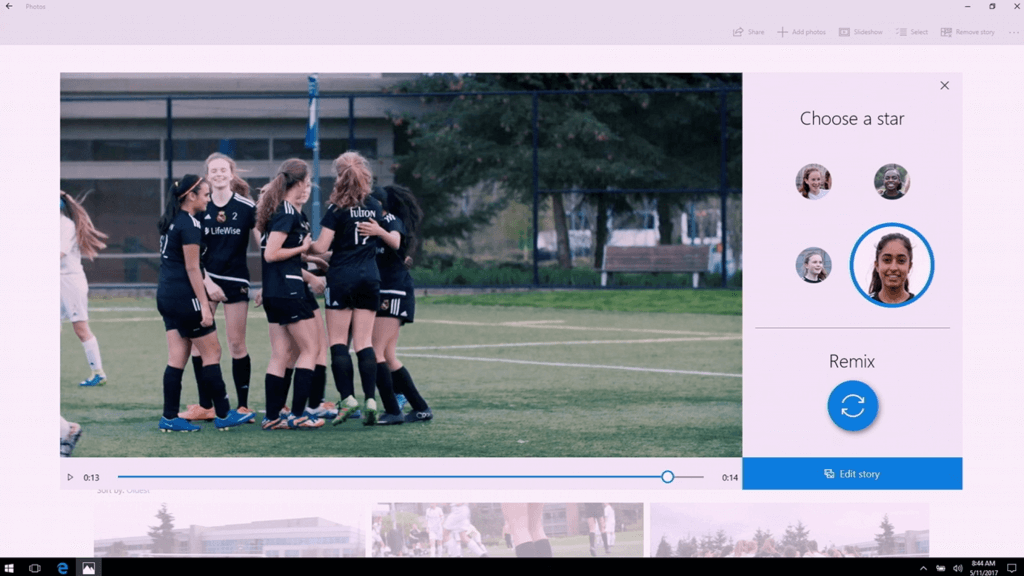 And moving on, after a few too long minutes, to Joe Belfiore. He is back, and always bring some nice energy on stage. 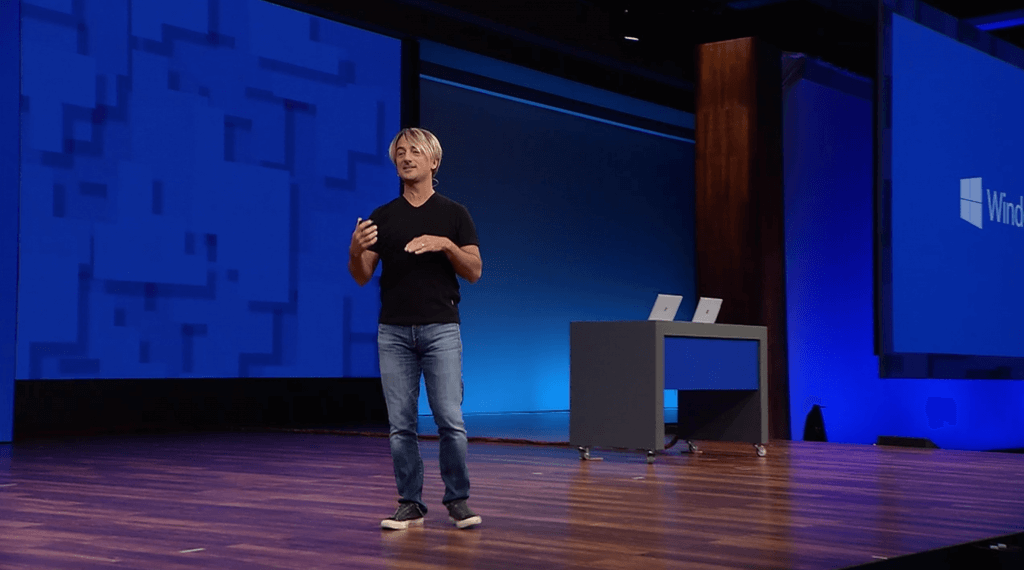 Windows’ new design system is called Fluent Design. This is, what I believe was called Project Neon at some point in time. We might eventually say goodbye to Metro design, which has been around since Windows 8. Some sample animations and screens were shown. As previously, we’re getting to Windows Ink. As a Surface Pro 4 user I once again have to remind myself that I need to use the pen a bit more. One reason might be that I rarely, if ever, use Microsoft Edge and ink has always been a big thing Microsoft likes to promote for Edge. Maybe the future me using the not-yet-available Surface Laptop with Windows 10 S might eventually get to use ink more.

It feels to me today’s keynote is less hectic than yesterday’s developer-focused keynote. I’m not complaining at all, as this doesn’t feel as rushed.

Windows will connect to Microsoft Graph in the future. This enables Windows-based PCs to bring files, live content, activities into a unified ‘cloud’. Microsoft Graph seems to be the intelligence here. Basically we will get cross-device scenarios with better file syncing and activity management, similarly to what we had with Live Mesh back in the good days.

Windows Timeline is a feature allowing you to go back in history to your work. This also requires Microsoft Graph, so you probably also have to hand over some of your privacy to sync your desktop app status to the cloud. It does look cool though, having multiple workstations and when you hop to a new one, you can sync exactly to the same apps, data and settings you had in another workstation. 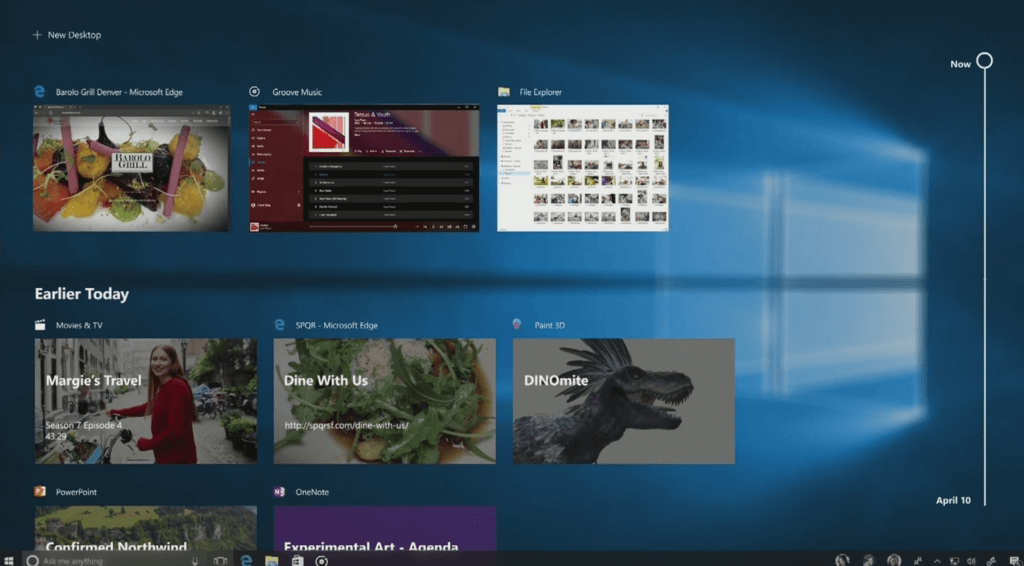 I can personally see a huge benefit from this. Instead of just syncing files like today, I can sync settings, views and even open apps. Apps can then be registered to Microsoft Graph, and Timeline will automatically prompt the user on a phone or other device if an app is missing.

We can also link our phones (iOS, Android, Windows Phone!) to our Windows 10 PCs. This probably enables the next functionality, which allows for “copyless paste” between devices. As such, I can copy something to my clipboard on a desktop PC, and have it available on my Android phone. In the demo, Swiftkey was used as it supports Microsoft Graph. I hope Microsoft Graph never goes down or fails authentication for me in the future, as it seems so much is relying on the signals it provides. Project Rome (Github repo here) technical documentation is here.

.NET Standard 2.0 for UWP announced. With this, developers can write in .NET, and have it available for all types of devices commonly used. If you’re not familiar with .NET Standard yet, there’s a good primer here. XAML Standard 1.0 was also announced. The Github repo for .NET Standard is here.

Project Rome SDK for iOS was also announced, get it here.

Terry Myerson back on stage. Continuous Delivery to Windows Store is now the focus. Visual Studio Mobile Center is mentioned, which is a lifecycle and mission service control for your mobile apps. Spotify is coming to Windows Store, and also iTunes! I’m not sure why it is needed, as it seems iTunes is barely needed these days, but this is definitely a welcomed addition. This is probably the result of Desktop Bridge.

Ubuntu will be on Windows Store. This is supposedly using Windows Subsystem on Linux, but the installation will be easier. SuSE and Fedora will be available also.

Xamarin Live Player is an app for iPhone, and it can be paired with a Visual Studio running on a Windows PC. This way we can write deploy .NET-code to iOS device without a Mac. If you change code on your Windows PC, it updates in realtime on the phone through the app. You’ll still probably need a Mac to sign your binaries to ship them to Apple App Store.

Now, moving on to Mixed Reality. I’m expecting to see Alex Kipman on stage with some new devices. After some reminders what HoloLens originally was. Kipman seems slightly nervous, but I would be too on that stage.

5.5 million hours of runtime or HoloLenses since last year. I think I’ve contributed at least 2 hours for that total number. No need to thank me! HoloLens will be available in China end of May. 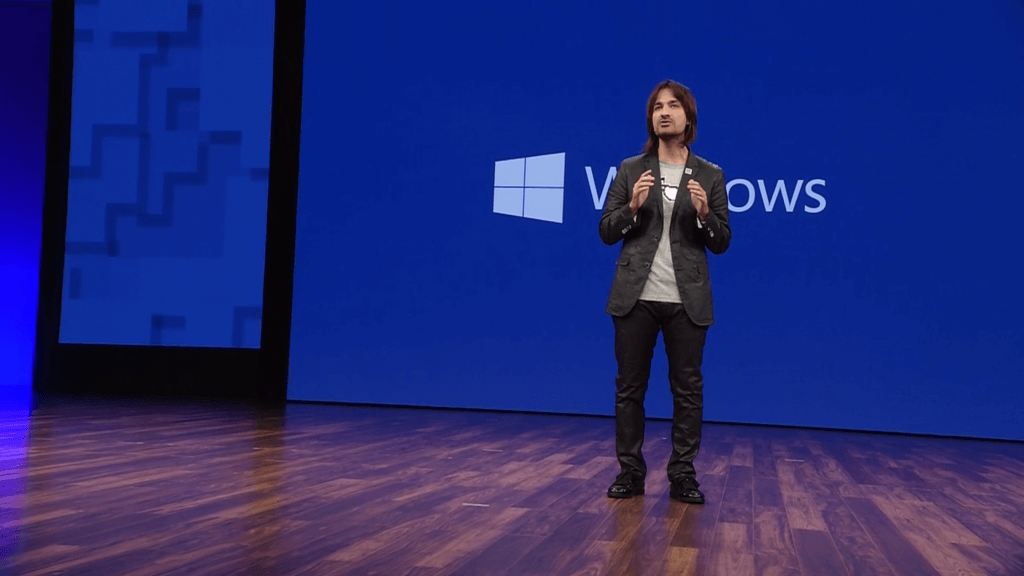 Motion Controllers for Mixed Reality is announced. It’s a handheld controller that can be used solo or in pairs. It has a thumbstick and a touchpad also. 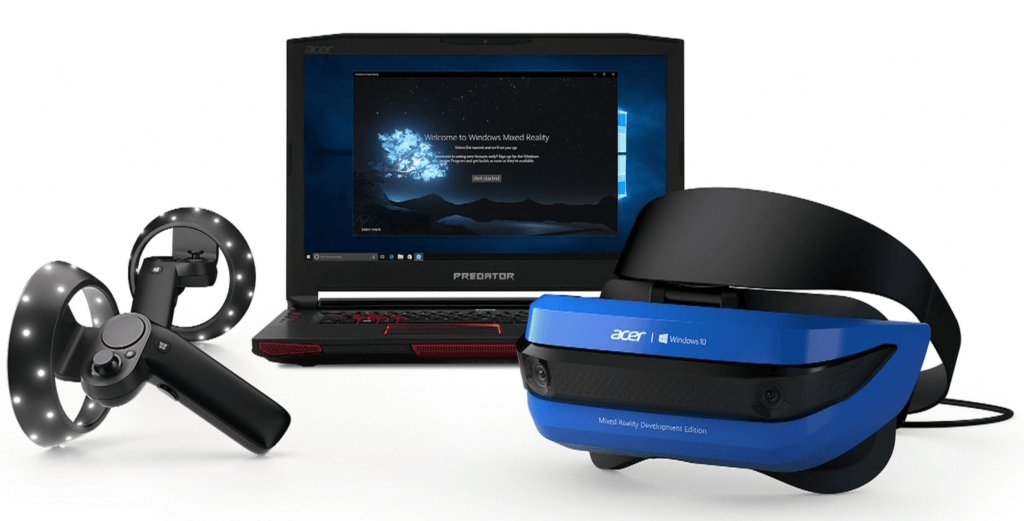 The bundle with Acer headset and motion controllers will sell for $399 this holiday season. In Europe that would probably be around 450-500 eur. Cirque du Soleil has teamed up with Microsoft for a mixed reality technology demo. I love how they pronounce HoloLens without the ‘h’. 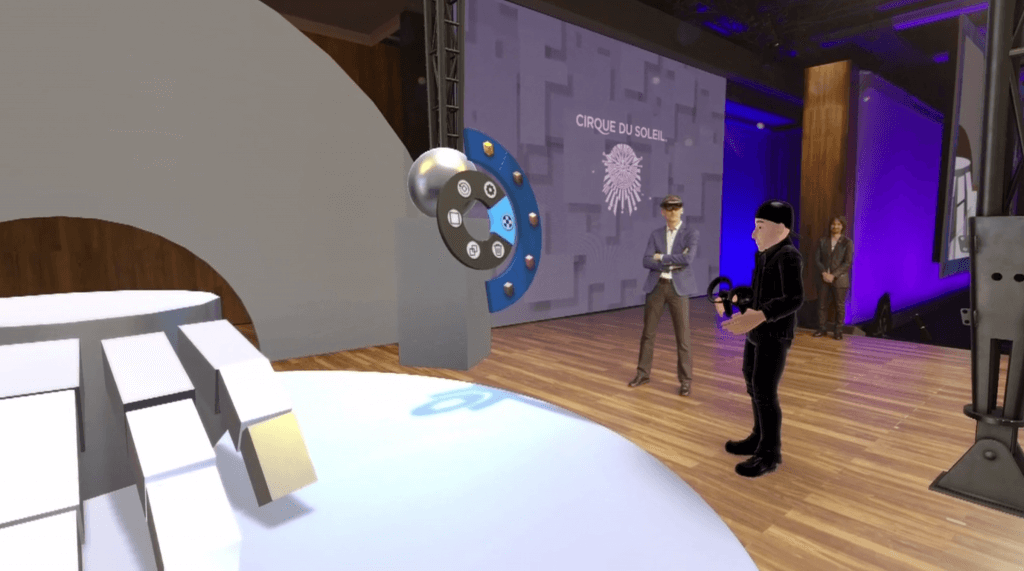 Yet another announcement, the Acer and HP dev kits for Mixed Reality can be pre-ordered now from windows.com/mixedreality.

And that’s it! A bit shorter than yesterday it seems, but with better pacing.

Placeholders for OneDrive for Business, allowing visual icons for files that are not sync’d to your local machine from Office 365. This will be part of Windows 10 Fall Creators Update.

Fluent Design, eventually replacing the current Metro design in Windows. This might be part of Windows 10 Fall Creators Update.

Windows Server now has Windows Insider builds. This will be available this Summer, and Windows Server will get frequent preview builds just like in Windows 10.

Windows Subsystem for Linux (WSL) will be available for Windows Server.

Containers: Container-optimized Nano Server will be available, as well as Container orchestration and Container Storage. Not much information is available yet, but here is the official announcement.

.NET Standard 2.0 for UWP and XAML Standard 1.0. These two allow developers to write in .NET for cross-platform deployments.

Common Data Service SDK Previewhere is out, read the announcement as well as sample code.

Spotify and iTunes will be coming to Windows Store as UWP apps. SAP Digital Boardroom is also in the works. Ubuntu will be also available through Windows Store, as well as SuSE Linux and Fedora.

HoloLens will be available for sale in China end of May. Motion Controllers for Mixed Reality announced, will sell for $399 with Acer device bundle.

A lot to digest from these two keynotes! I will have to spend some time to get more familiar with some of the announcements, especially everything related to UWP as it still seems to be a huge investment from Microsoft. HoloLens still seems a bit of a novelty, but hopefully cheaper devices are good enough for common household use also.

Recap of announcements from Microsoft 365 technical keynote at Build 2019

The future of deeply customized SharePoint