We’ve had a relaxing rest at the nearby hotel, and it’s time to start the second day of Microsoft Build 2018 in lovely Seattle. This morning keynote will be kicked off my Joe Belfiore, so expect a lot of demos and announcements around Microsoft 365. This of course includes Windows 10 (especially Timeline, possibly Sets also), some bits and parts of Microsoft Azure in terms of Enterprise Mobility + Security (EMS), and I would guess a little bit of productivity from Office 365 side of things. Therefore we might get official announcements on certain Microsoft Teams features also. 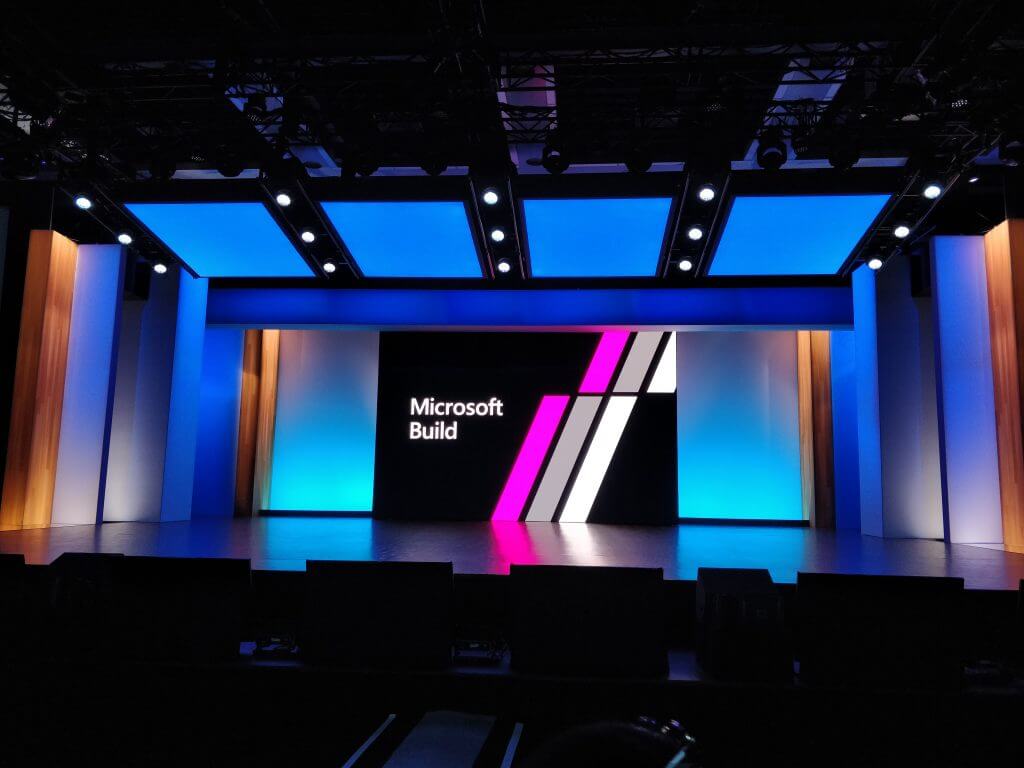 I got a notification through the official Build mobile app last night, alerting me to some new sessions in the schedule builder. After skimming through them it made sense, as they were all around topics that were announced last night – the DJI SDK, for example. I think we’re getting majority of the sessions in Channel 9 in the coming weeks, so there will be ample time to view them.

As is customary by now, I’ll recap the announcements made during the keynote at the end of this blog post. Joe Belfiore on stage, with good energy. The leave of absence probably did good for him. We start with, as you guessed and anticipated, Intelligent Cloud and Intelligent Edge. It’s a message that was first introduced last year at Build 2017, and we’re getting a deeper meaning for what Edge computing is (hint: it’s not a browser).

Some jabs at Google, as Google I/O is happening this week also. Not sure it’s needed but it seems friendly and they’ll probably return fire later today from Google.

We get to Microsoft 365, thus Windows + Office + EMS. There’s been some discussion as of late on where Windows stands. To me, Windows 10 seems more visible and important than ever, but it’s not a separate island anymore. It’s more about connecting with Office 365 and Azure, so that’s where EMS makes sense. If you’re not familiar with EMS, it’s a bundle of licenses that you purchase for each user in your organization. It includes services such as Intune, Azure Active Directory Premium and Azure Information Protection. There will be 4 chapters on Microsoft 365 during the first 90 minutes of the keynote. I know, these keynotes keep getting longer each year. These will be Windows, Windows developers, Office development and Microsoft Graph.

Windows 💔 all your devices is the slogan. See, I used the new Windows 10 emoji keyboard (activate with <Win> + . (dot/period)). Timeline, obviously. It uses Microsoft Graph in the backend to synchronize your (select) open apps between multiple machines. You need to be logged in with a Microsoft account (Azure AD or MSA) to perform the sync. In standalone configurations it still works but doesn’t give you a long history. This is definitely one of my favorite features with the April 2018 update (Redstone 4) for Windows 10.

Windows Insider builds are soon getting a feature in Start menu, where Cortana suggests where you left off. It will be interesting to see how clever Cortana is, as Timeline is a bit limited on apps for now. In my tests it did not understand cmd.exe or PowerShell at all, but is mostly concentrating on Office productivity tools.

Shilpa Ranganathan next, to talk about Windows Mobility experience. Not Windows Mobile/Phone. These are the Microsoft apps on iOS and Android, and they are under a “Microsoft 365 apps” moniker, which I still find a bit hard to fully internalize. First announcement, Microsoft Launcher for Enterprise. It’s a customizable launcher for Android, with some Microsoft innovations in it. The Windows 10 “Your Phone” app currently is a link to install the app. 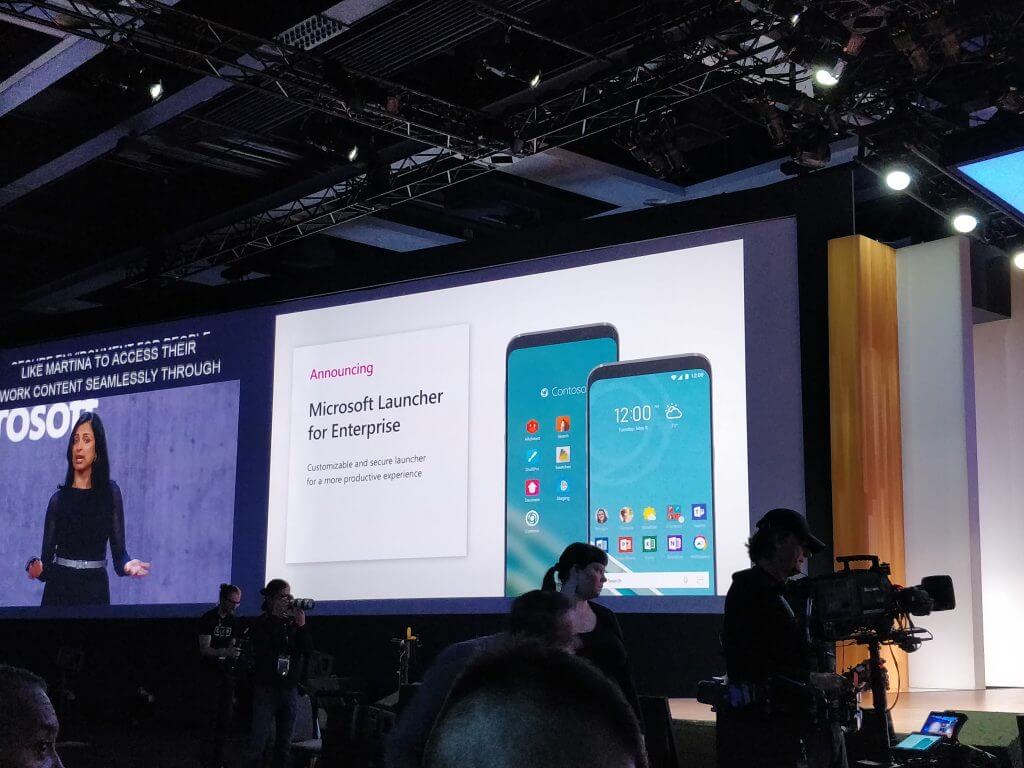 Another announcement, Timeline on Phone (both iOS and Android)! This is unexpected but great. This explains the limited app support in Timeline on Windows desktops — I can now pick up from where I left off on my PC and continue on the phone. Another announcement – a future version of Windows 10 will include a Inbox app that connects the phone with the PC. This might be the “Your Phone” app but on steroids. It seems this is true as the slide has a Your Phone title in the screenshot. Shilpa tells that it synchronizes your text messages also. I find little value in that, but more value in syncing content and accessing apps from PC, and vice versa. Then again, most of this functionality could also be in OneDrive for Business, that many corporate customers already use with ease.

I checked for all three apps, but they are not yet available on Google Play store.

Joe Belfiore back on stage. Sets, which is pushed for Redstone 5 (so ~Q4/2019), although Joe is also telling that Sets will be released when it’s ready. Essentially it’s a capability in apps allowing multiple instances within browser-like tabs. Bing at Business seems to be renamed Bing at Work now. I’m still in line for the preview since Ignite last year, so it seems to be a work in progress. 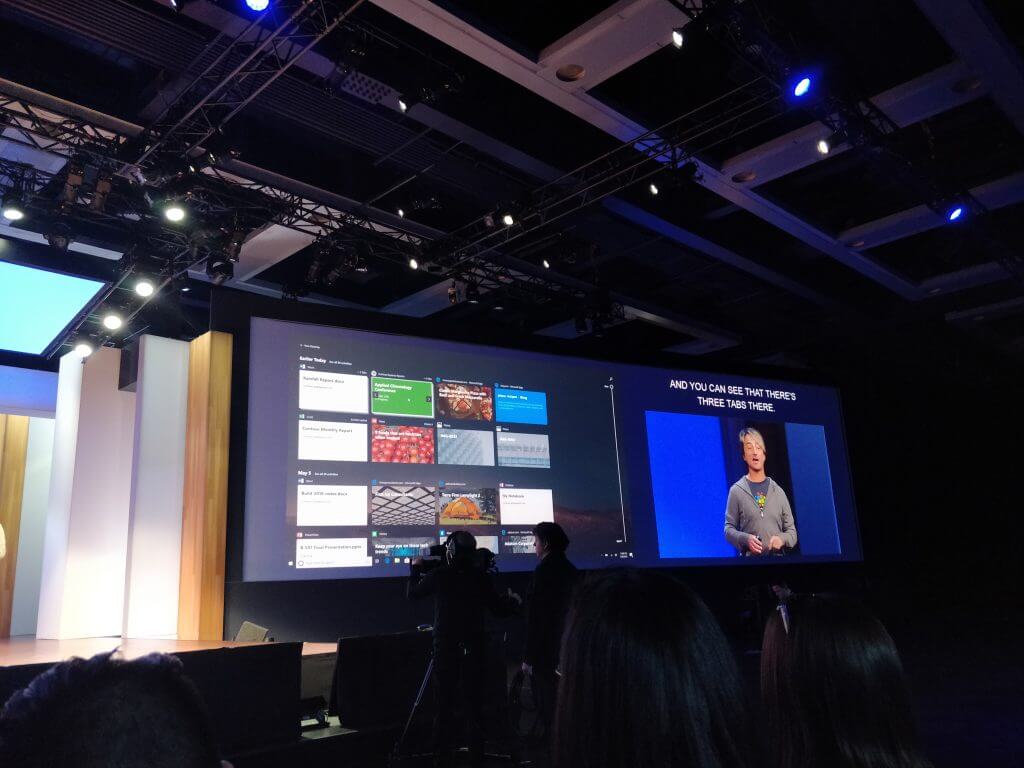 Sets has built-in memory, just like your browser can restore sets from earlier browsing sessions. Can’t wait to get Sets in a stable mode in a future Windows 10 release! Relationship of Sets and Timeline is logical, as each item in Timeline might support a Set with small arrows pointing left and right. As a note, Sets is part of a current Windows 10 Insider build, so if you need to test Sets today, just sign up to become a Insider.

Next, Kevin Gallo to talk about Fluent Design System, the new UI/UX framework for Windows. We got the first sneak peek in Build 2017, so interesting to see how things have progressed.

We move on to Windows developers, with modernized apps, improved deployment and a great dev box. First announcement, UWP XAML Islands. These are controls for WinForms, WPF and Win32 codebases. Thus ,your Windows app can access the modern UWP controls, regardless where your app is now in terms of the codebase. See the early dev documentation here. If you’re paying attention to the Windows development landscape, it seems this is the first solid step forward for Fluent Design System.

We get a quick demo on using these new controls in Visual Studio. I don’t spend my days writing Windows apps (anymore), so this seems like a bridge towards web apps, and other modern apps that employ the UWP standards. 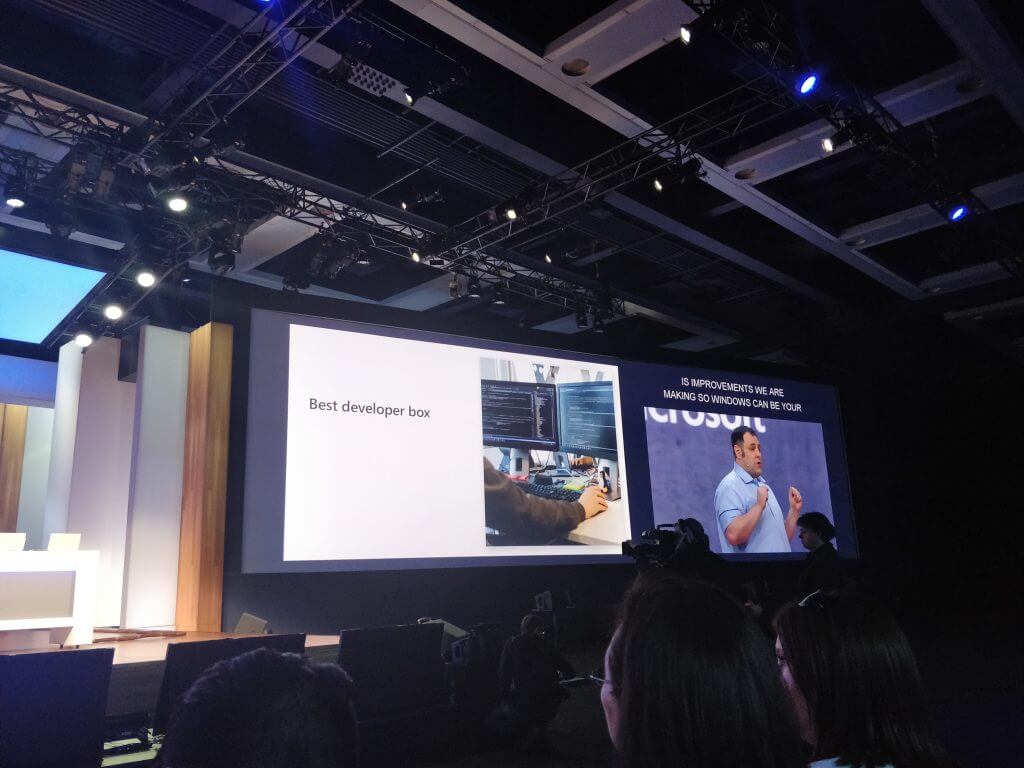 Next announcement, Word with WinML. A bit like the Hemingway App, to make your grammar better. Windows ML is detailed here in more depth.

Next announcement, .NET Core 3.0.  Coming later this year, it seems.

Chocolatey gets some love, as well as Boxstarter. Great tools, both. 135 million commercial active users in Office 365, and 200,000 organizations using Microsoft Teams. We are a few demos for developers on these next.

Yina Arenas from Microsoft Graph team on stage next. Thus we move to Office dev (step 3) of the keynote. Exactly 60 minutes done, about the same left.

Excel Functions being demoed first, that allows custom JavaScript to be executed. Thus, custom functions that pull data from elsewhere – such as Microsoft Graph. This was initially announced last year, I think during Build or Ignite but there has been very little noise about it afterwards. See updated docs here. Buzzword is “cloud-connected experiences”, which I like more than “cloud curious” we had last year. 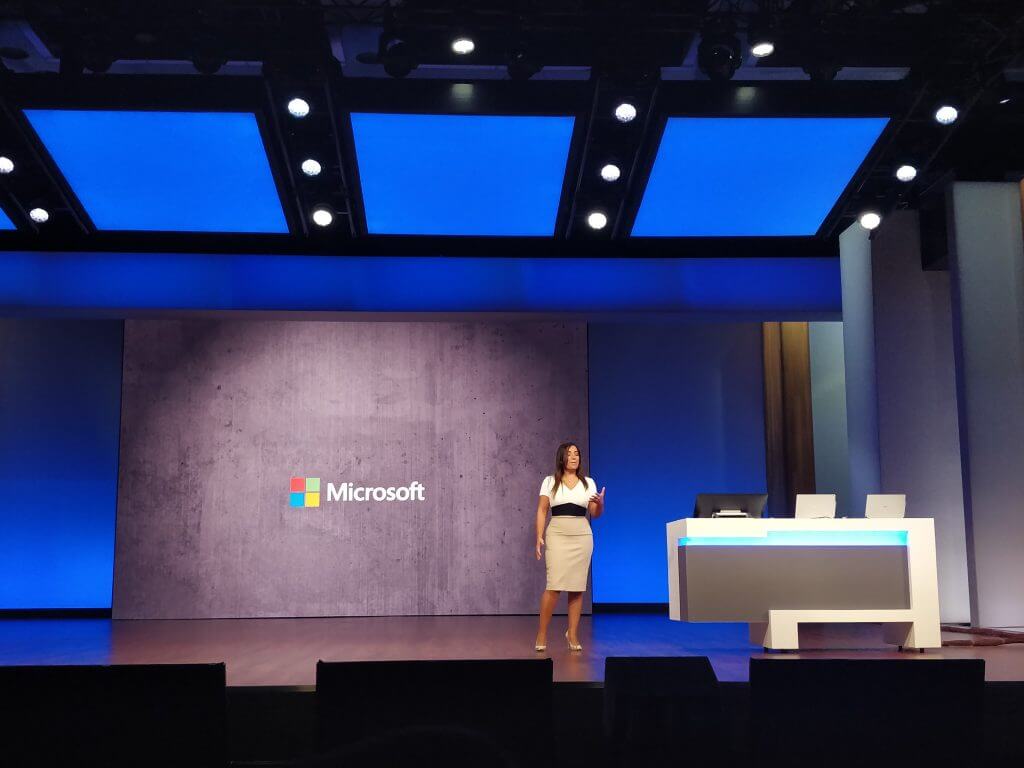 Charles Morris next, GPM for web platforms. Adaptive Cards next, see here for a tutorial. Interesting how all demos that are around email are using Outlook on the Web, and not the traditional desktop client anymore. Announcement on payments in Outlook. Available in limited preview, but guidance already available here.

Kristina Behr next to talk about using Teams in patient care. There was an announcement around this yesterday but not during the keynote. With the latest updates organizations can build custom apps and publish them on the Teams platform. There’s also the Teams UWP app on the Microsoft Store, but sadly only available for Windows 10 S devices, for some weird reason. The demo so far is a recap of the usual features available in Teams – bots, conversational AI, apps.

Yina Arenas back on stage and we move to chapter 4, Microsoft Graph. If you’re not familiar with this amazing service, get started here. “It’s your data in Microsoft 365”, last year it was still Office 365 but we have to refresh the marketing message a bit.

A demo on using Graph data through a UWP app. The app is vey modern and smooth, hopefully we’ll get more of these in the future. It’s also a primer on what Microsoft Graph really is. 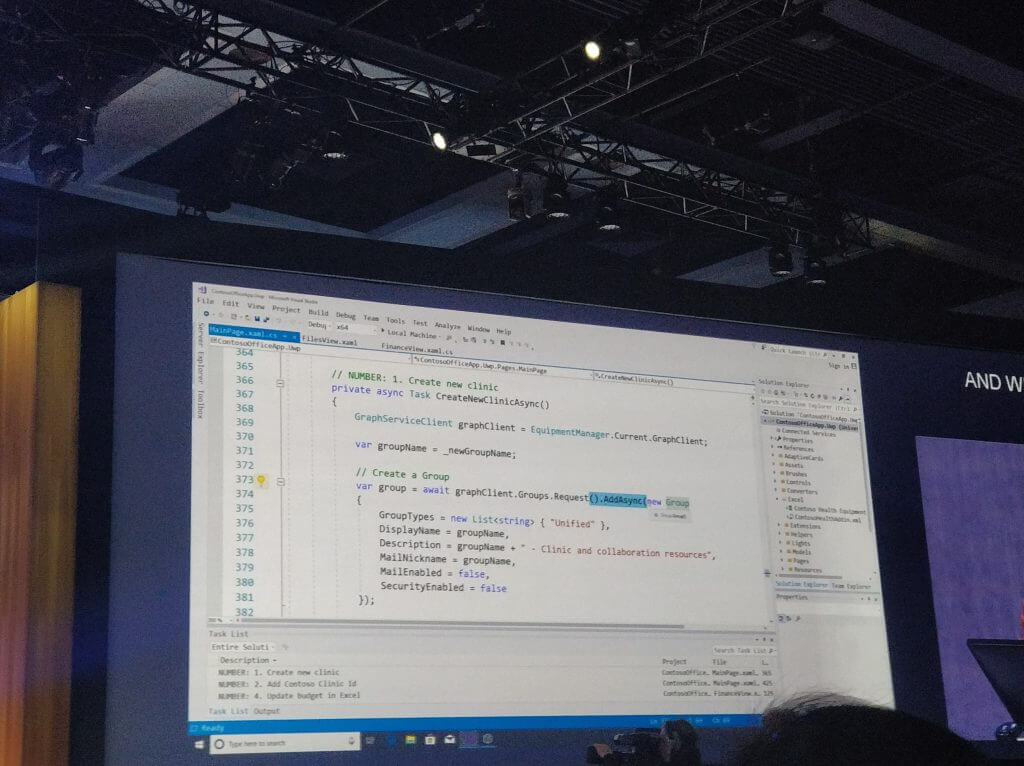 Joe Belfiore back on stage to wrap up the tour around Microsoft 365. I’m pleased, some very good stuff here and interesting announcements. A call to action – get the latest SDKs and start using Insider bits. Use Gaph in your app, and modernize UX with Fluent Design. Last, consider if Office is the dev platform for you. I felt today’s keynote was better than day one. This was more hands on, and pace was better. As expected, we had a lap around most things in Microsoft 365.

This was a shorter keynote, and it is appreciated!