Hello again, and welcome to the recap of Microsoft Ignite 2019 Vision Keynote! If you’ve read my earlier recap blogs, you know what to expect – interesting announcements, and a lot of resources and documents to learn more from that I’ll link to.

I arrived in Orlando late Saturday, and while travel was relatively easy it’s always an extra push to adjust to a different timezone, climate, and schedule. I’m anxious to write about the announcements from this week, so expect a lot of content and excitement in the coming days! This year Ignite has not one, but five keynotes – Satya Nadella‘s Vision Keynote to kick things off, and four separate technical keynotes that concentrate on Infrastructure, Modern Workplace, Security and Business Applications.

You can review all the announcements from the Book of News.

This year the vision keynote is scheduled to run for 75 minutes, so expect it to be packed. 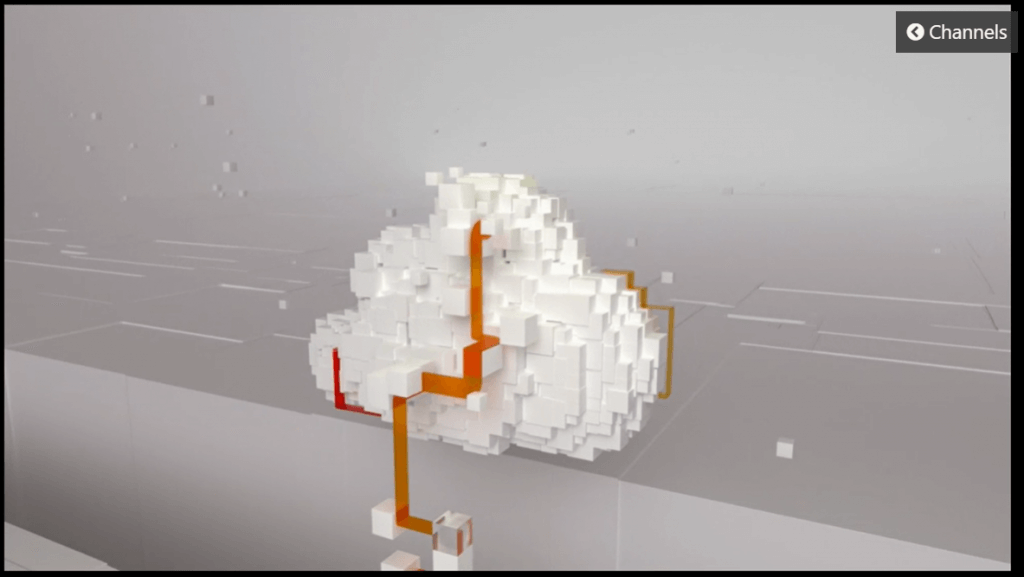 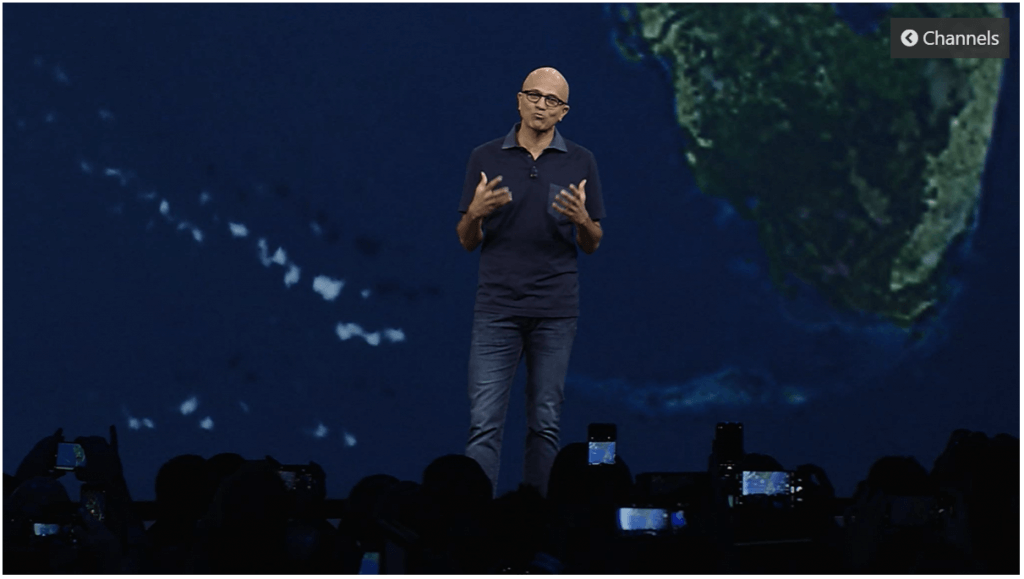 Tech intensity is the overarching topic for this keynote. A Stranger Things-inspired clip is played, starring Mr. Nadella and showcasing inspirational Microsoft technology such as Azure Kinect, and Intelligent Edge.

Tech intensity = (Tech adoption x Tech capability)^Trust formula is shown once again. I recall we show a simplified version of this back at Microsoft Build 2019 in May.

Microsoft’s mission is hammered home again, which is the usual approach. I’m not sure how many other company mission’s I could recite from memory – but Microsoft’s “to empower every person and every organization on the planet to achieve more” is one of those.

Azure is the world’s computer. 54 datacenter regions and the stack has openness built into it. Azure Stack Edge is being announced, and it’s a hardware-based solution with built-in FPGA for superior AI-inferencing.

The next announcement is Azure Arc, which is a management approach to VMs (Windows and Linux) and Kubernetes-clusters. It allows the management of resources from ‘one pane of glass,’ as the saying goes. The infographic on this is useful. You can provision Azure Arc through Azure Marketplace. 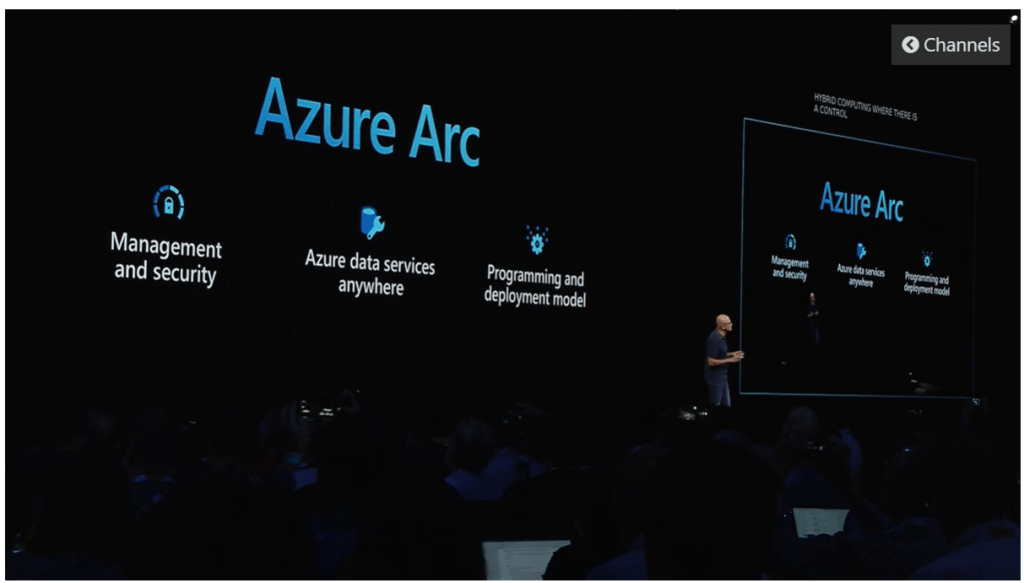 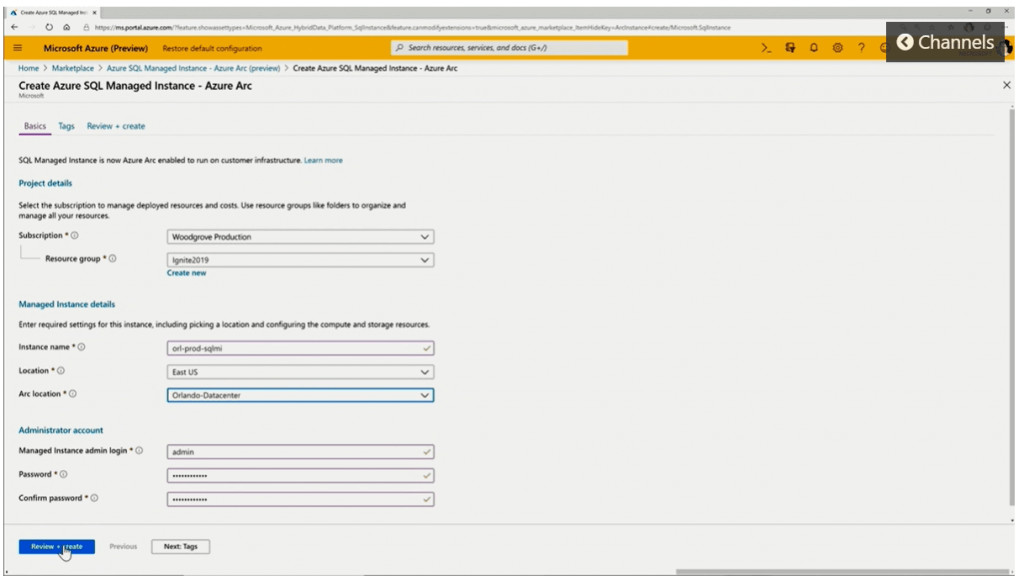 In the demo, an Azure SQL database is being provisioned from Azure Portal to an on-premises datacenter. During the preview, Azure Arc is free of charge. In short, Azure Arc allows multi-cloud and on-premises management and governance. Very impressive!

I was able to quickly test Azure Arc, and it’s already available in my regular Azure tenant.

Back to Mr. Nadella. Moving to data next. 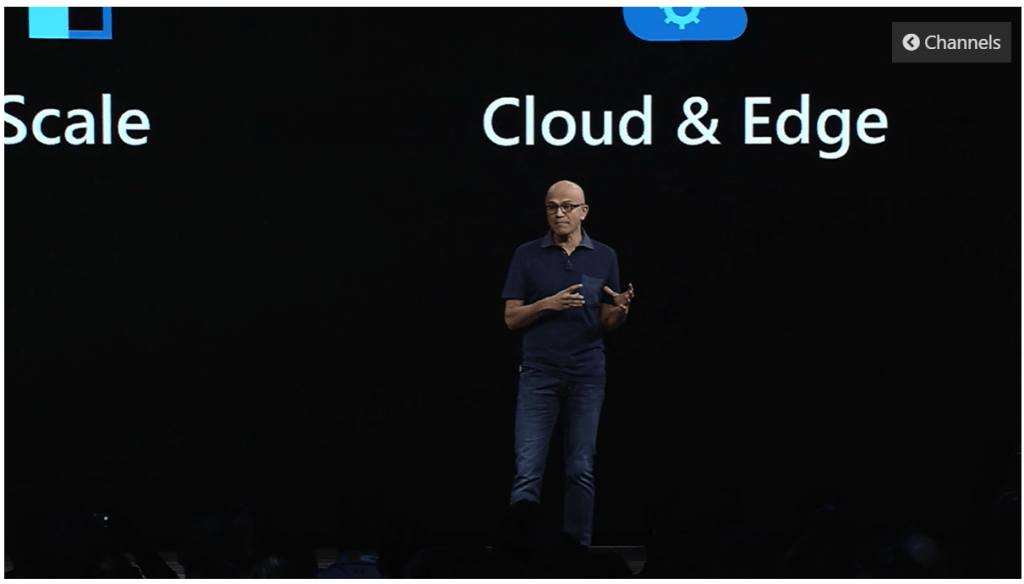 Azure Synapse is announced. It’s a limitless analytics service, combining enterprise data warehouses and Big Data analytics. You can find the technical details here. Pricing is based on compute units and starts from $929 a month for 100 DWUs. 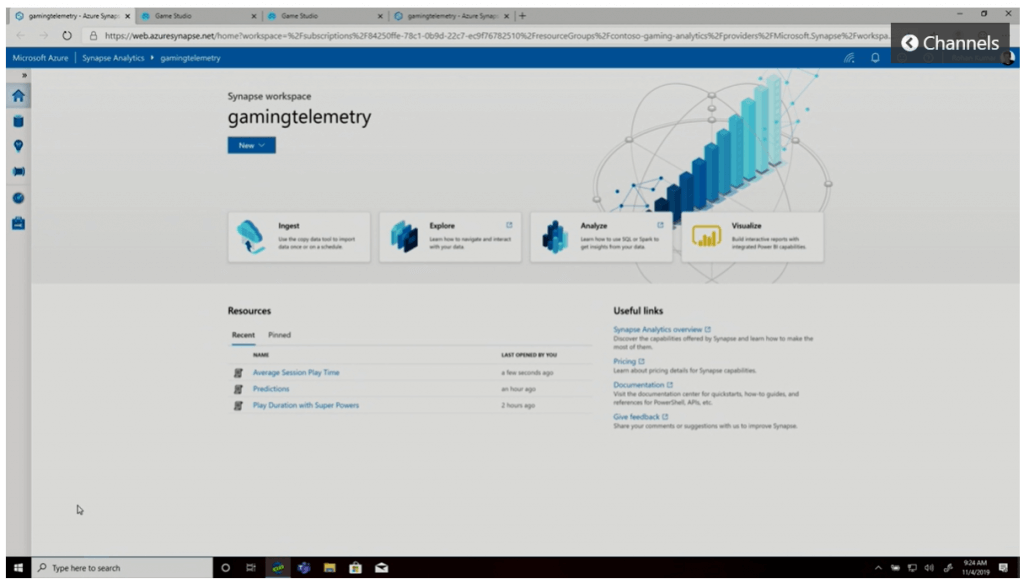 A stab at Google’s BigQuery, and Synapse is claimed to be 75 times faster for similar analytics workloads. I find it interesting that we’re spending many minutes on this, as I also feel something like Azure Synapse isn’t a mainstream product. 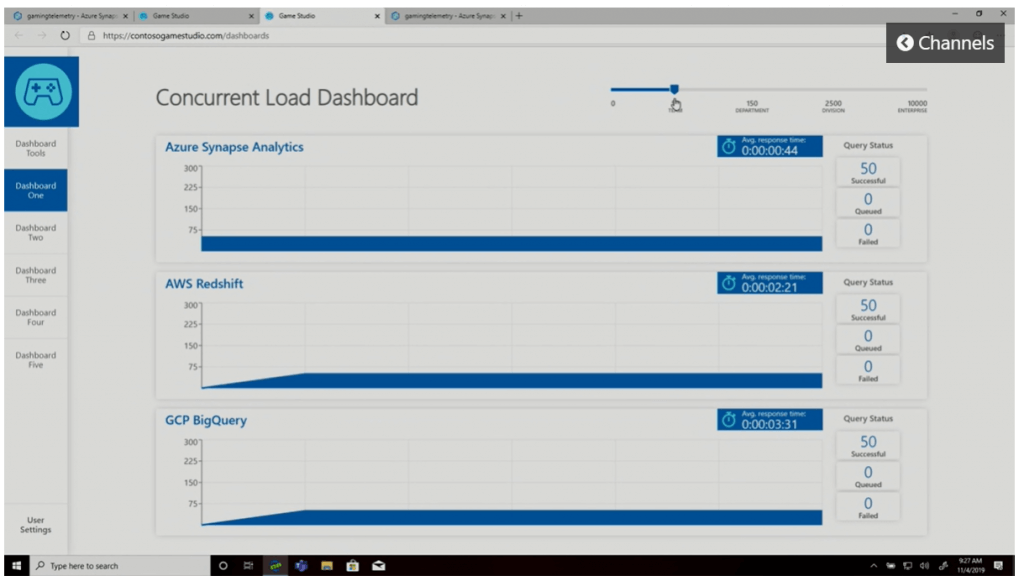 And back to Mr. Nadella again. 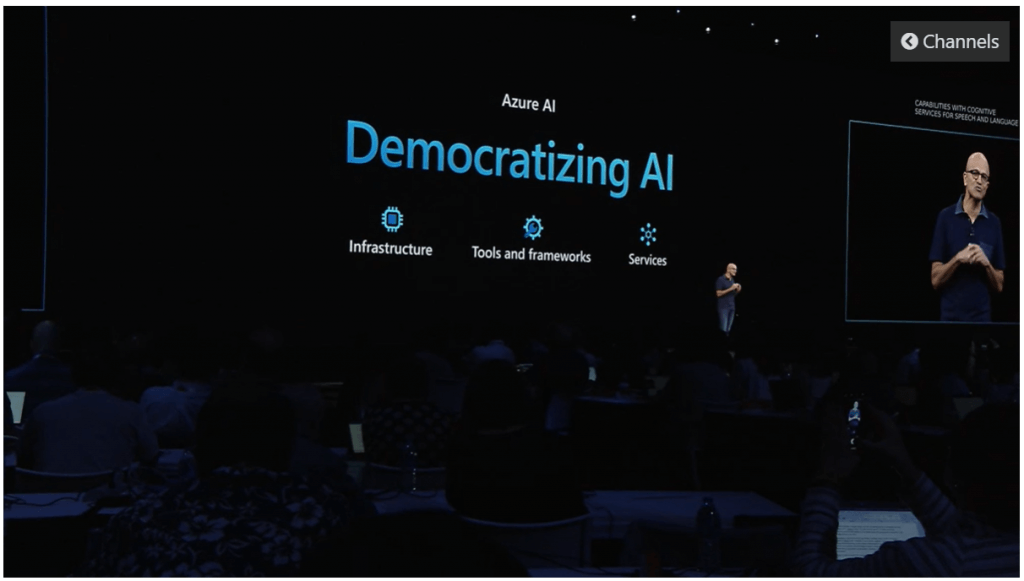 Moving on to AI. Autonomous Systems first, which roughly equals to machine teaching.  It isn’t a product per se but more a paradigm that Microsoft now supports through Azure AI.

Project Silica next. It’s a breakthrough from Microsoft Research for storing data on quartz glass. Very much a proof of concept still. Next, Quantum Computing. Azure Quantum is announced. It’s a toolkit for building quantum solutions using algorithms and quantum computers. In a way, it isn’t a new announcement, as much of this technology was already announced in July 2019.

Trust and security next. 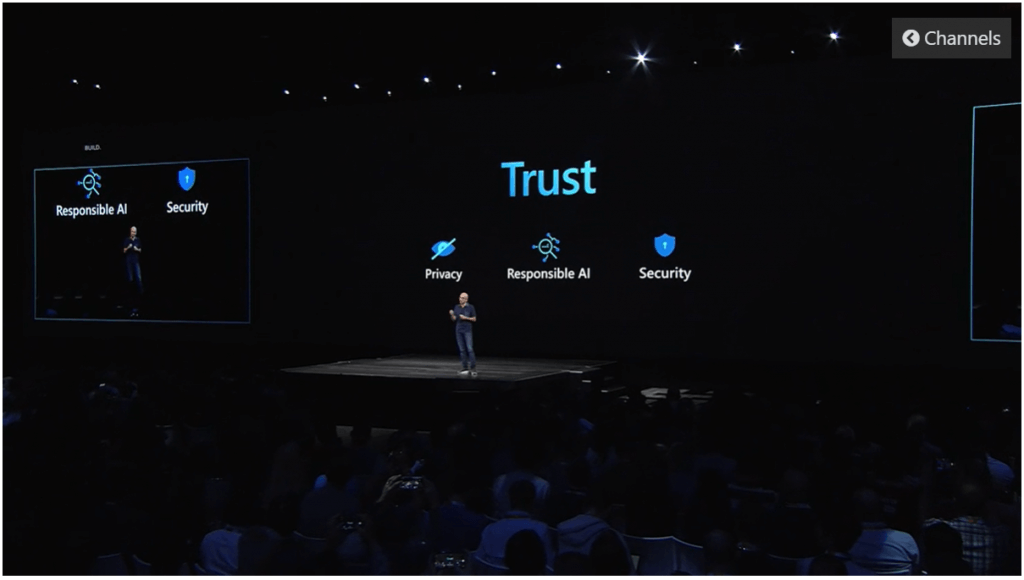 Last year the total amount of cost of cyber attacks was 1 trillion dollars. There’s a huge business opportunity then also.

Microsoft Endpoint Manager is mentioned. It’s the convergence of Intune and Configuration Manager functionality. The announcement states this is the future of management.

Moving to developer topics. A brief recap of previous announcements, such as Visual Studio Live Share and Visual Studio Online. Nothing announced for now. A transition to Power Platform next. Microsoft Flow was renamed to Power Automate, and that was announced in a separate blog here. 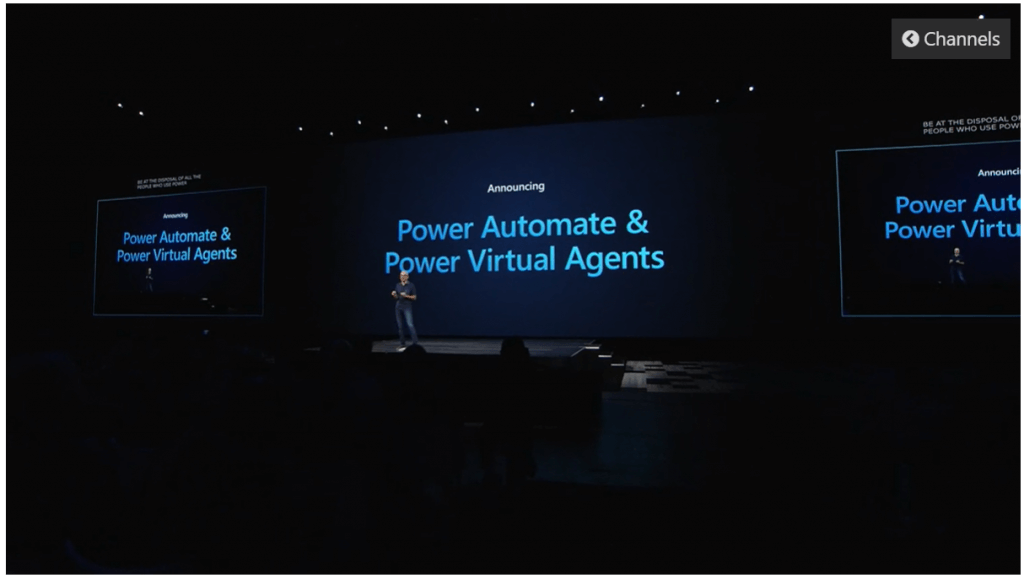 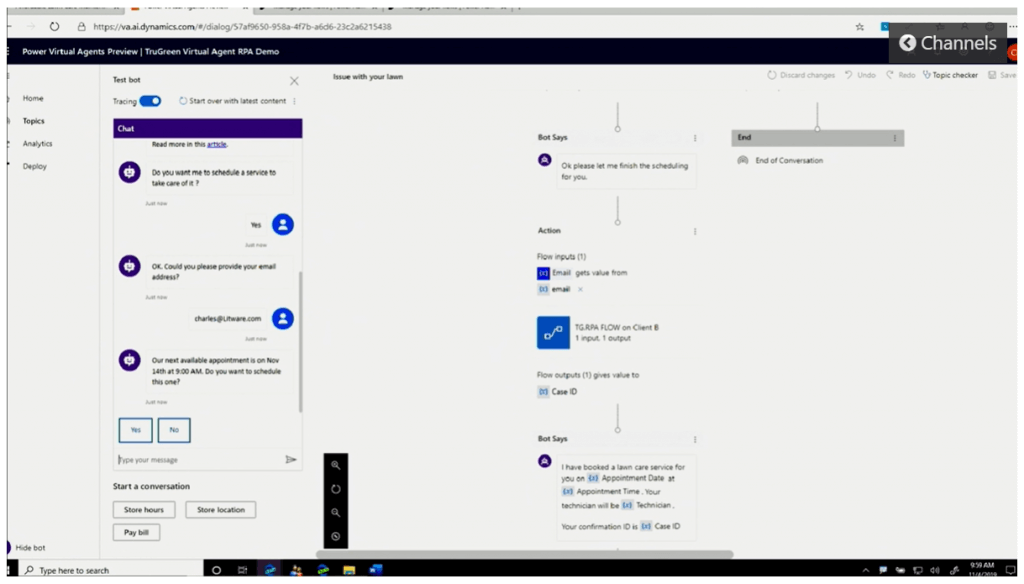 Next, Dynamics 365. Vague talk about industry solutions where you can operationalize AI using Dynamics 365 solutions. I couldn’t find any announcements during this portion.

Switching back to Mr. Nadella and Microsoft 365. 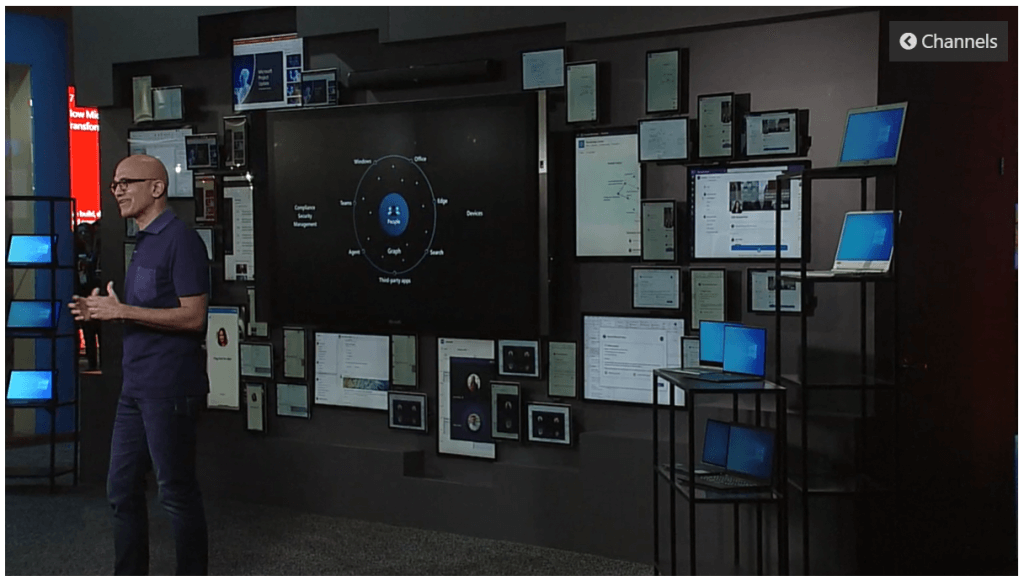 Teams announcement first – private channels are generally available, as well as multi-window chats and integrations to Yammer and Outlook. Project Cortex announced, and it’s the knowledge management solution for Office 365. It’s AI-powered Wikipedia for the organization, to put it simply. 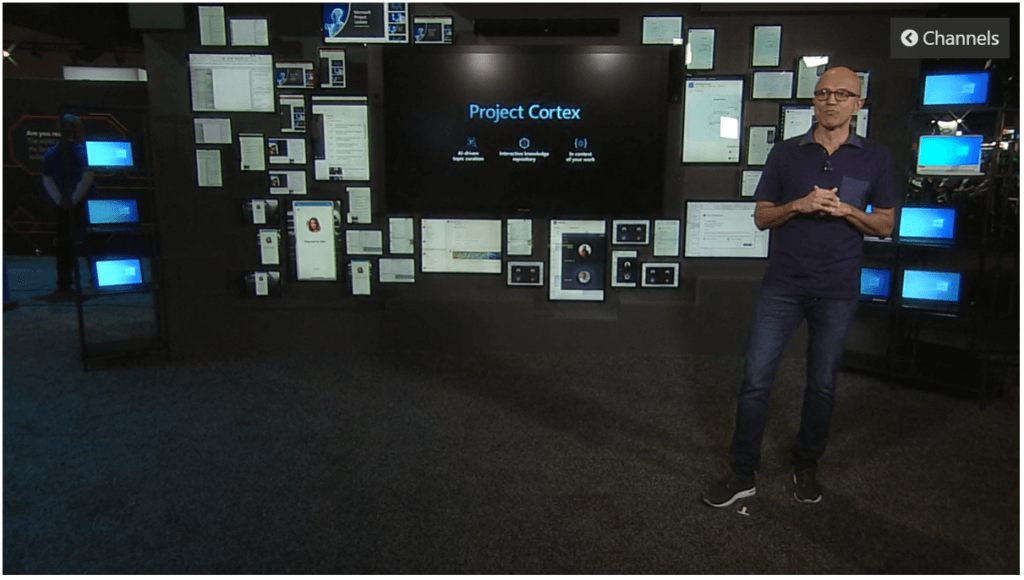 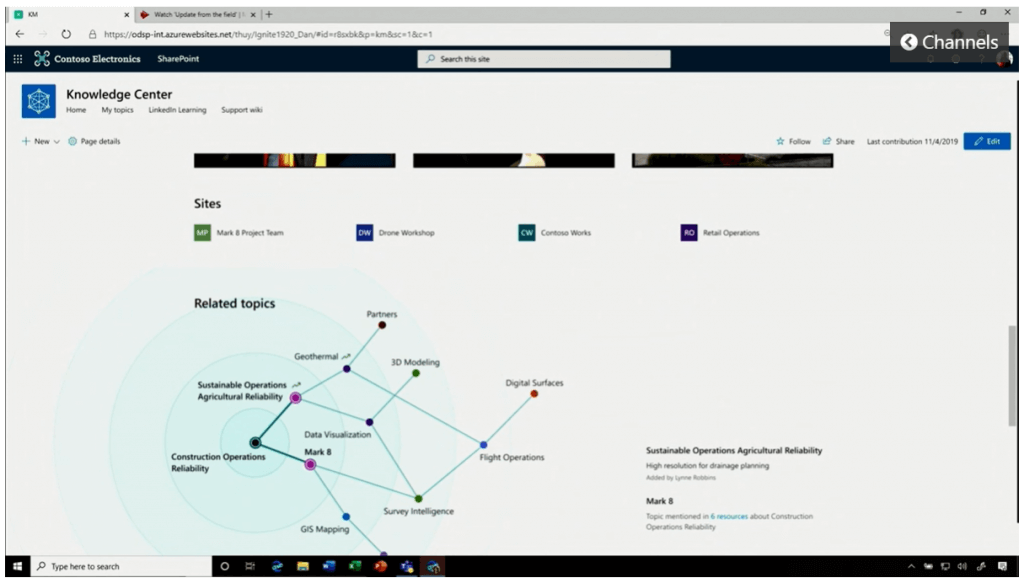 A bunch of demos on the top Teams, Stream and other productivity tools. I kind of lost track at this point of the keynote, as we kept hopping from presenter to presenter, and Mr. Nadella, I guess, took a break.

Teams for Virtual Consultation was announced, and it’s a healthcare solution for customer service calls, candidate interviews, and patient consults.

Back to Satya now! The future of the web as the last topic. At this point, we’re about 18 minutes overtime, which I guess was to be expected. Microsoft Edge and Bing being discussed; Microsoft Edge update announced, including new Tab Page and InPrivate search when you use Bing. Several other tweaks to Edge mentioned also.

Finally, back to Nadella, and closing the keynote. Minecraft Earth gets a demo. 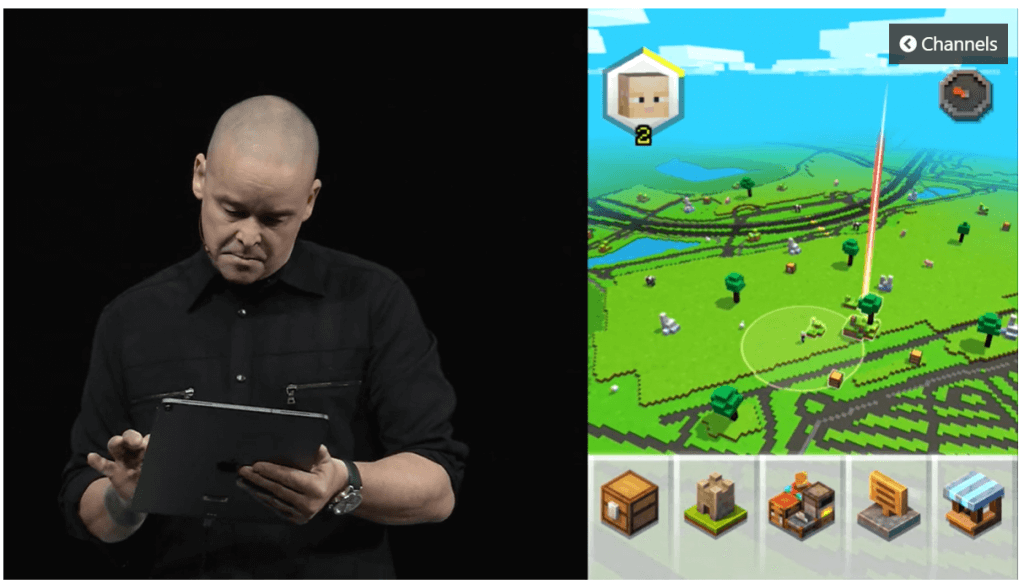 And that concludes the vision keynote!

Okay, pay attention here. There was a lot happening during the vision keynote, and I think I was able to capture all relevant announcements.