Spring SharePoint announcement event is almost a tradition by now. Last year we had The Future of SharePoint event in early May, this year we have SharePoint Virtual Summit. In a way I’ve felt that SharePoint, Office 365 productivity tools and all the features and services that fall in between deserve their own keynote, time and place. Build 2017 just wrapped up, and it’s still a long way until Ignite 2017 in September. These online announcement events are fun as I don’t have to travel, and they occur in a friendly time for us not in Redmond.

I’m expecting to hear news, and reassurances that Yammer is very much not forgotten. I’m hoping to hear a bit more on SharePoint 2016 Feature Pack futures, the latest on SharePoint Framework Extensions that was announced during Build, and maybe some sort of vision for the next 12 months.

And here we go! The presentations are, from what I’ve heard, pre-recorded, so the following hour or so should be a carefully rehearsed choreography. Sadly, that sometimes means things get bland or they seem too fake but I’ll take that over non-working demos and awkward pauses (I’m Finnish, and I am more than okay with silent moments).

Keynote should run for a full hour, and then we’ll get customer showcases, some live Q&A and a few on-demand technical sessions.

Seth Patton, General Manager for SharePoint and OneDrive business, kicks off the keynote. The usual ease into what’s available today. I realize this message needs to be reinforced constantly, as people are so often lost with the rapid pace of new features and changes within Office 365 and SharePoint in general. It almost feels like a full-time job at times so I can relate.

Today the theme is manage and extend, last year I think it was the 3 G’s (Govern, Graph and something I forgot already). Many businesses don’t have such velocity in changing thinking. Partially I feel it’s nice that Microsoft is setting a breath-taking pace, but at the same time I feel that we should maybe pause for a sec, and gather our thoughts. 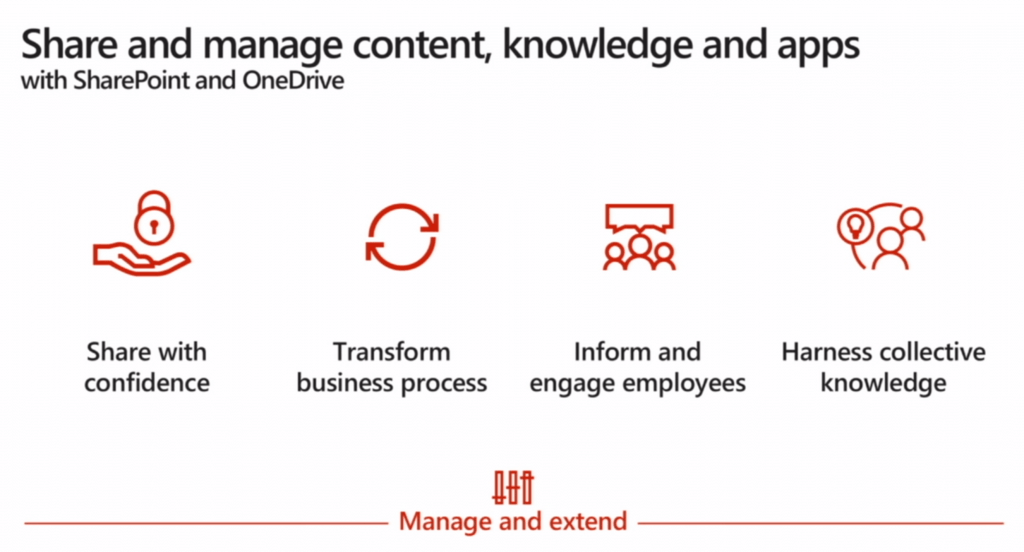 And now we have Jeff Teper on stage, as expected. SharePoint Saturday events get a shout-out! As a frequent visitor to many, many international SharePoint events I am happy to see several cities listed that I had a chance to participate. 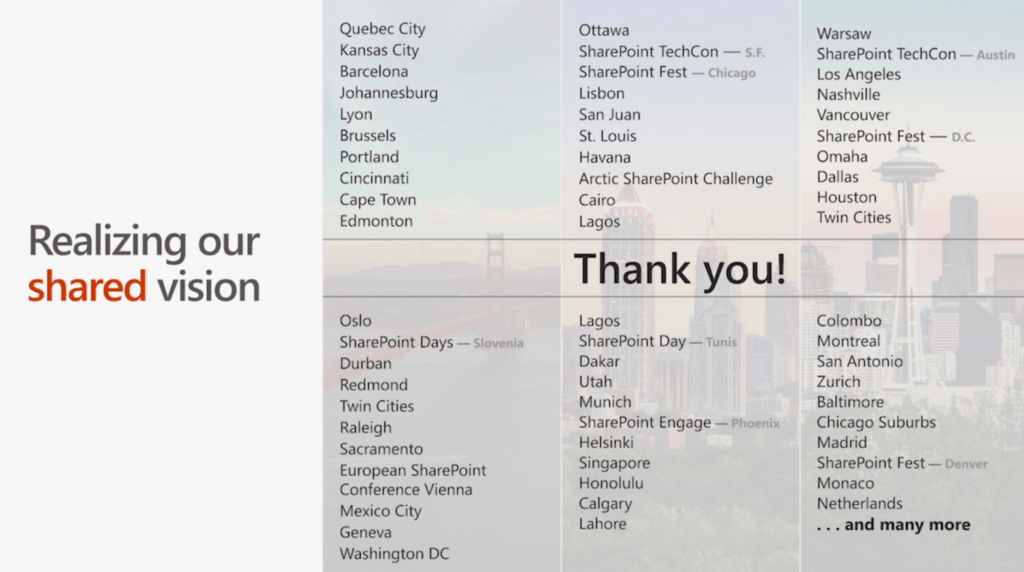 Last year it was about team sites, portals & publishing and business apps. Since then we’ve become quite accustomed to PowerApps and Flow, Modern Team Sites and the SharePoint mobile app.

As expected, Files On-Demand for OneDrive for Business that was announced during Build, gets a mention here. It allows users to not sync everything, but rather show placeholders for non-synced files – similar to Dropbox Smart Sync. For some background on this new feature, see here.

New sharing controls, Share with confidence, including expiring links for OneDrive for Business are shown in the demo. The official announcement is here.

Connecting existing sites to Office 365 Groups is finally becoming available. Not sure when I first read on this, possibly last year at Ignite 2016, but hoping this will soon become available. We’ll also get Groups resources to show up on navigation and pages. Tiny things in the big picture but something I hear customers constantly hoping and asking for. We should also be able add SharePoint pages as tabs in Microsoft Teams. Nice!

Dan Holme and Naomi Moneypenny showed some of the new features, in a modern site.

PowerApps and Flow get our attention now. PowerApps last year was all about mobile apps (which it really wasn’t, that much) and this year they are about replacing older SharePoint views and UI items. So, kind of “modern InfoPath”, if you will. This was expected, as modern SharePoint team sites already had the “Add Flow”-button, so editing the very same views as PowerApps views seem simply logical. Editing SharePoint list views using PowerApps-enabled UI (a custom form, in essence) is coming this Summer. Check out more info for this here, and here.

Simple approval flows can now be built into SharePoint libraries. Similar to what has been available for Flow actions, we can automatically generate a nicer Approve/Reject-email as part of our business processes. I remember building some rather dumb approval forms with InfoPath 2003 back in.., yeah, 2003. With PowerApps it will become so much easier and integral to SharePoint.

Collective knowledge is a personalized search using machine learning and AI (of course!) from Microsoft Graph. Very happy to see updates to search, as it’s been very problematic with Office 365 Groups. Search now includes a people card, which should be much richer. These changes are coming in a few months.

Communication sites in SharePoint are aimed for reaching a broader audience. Is this the new Publishing Site/InfoPedia concept? There’s  some guidance available at Tech Community already. 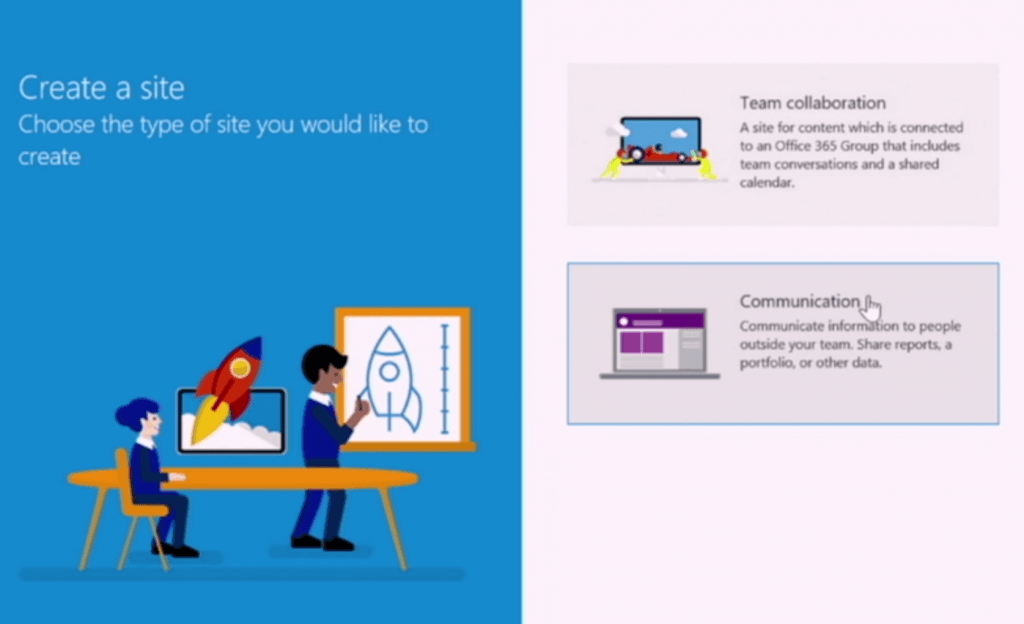 You can create communication sites, and they seem to support multi-column layouts. You can also add pages as part of the site, so this seems very much like the new incarnation of a landing page or a publishing site. I would have hoped to keep the old name, but maybe it’s better to cut away some legacy terms and move on. You can see the communication sites in action in this video.

Hybrid and Cloud coexistence with SharePoint 2016 is next. Finally, a new SharePoint Admin Center! The old one has been an embarrassment for too long now, so this was long overdue. I hope they’ll hide a bit of the legacy stuff in the new admin center, and bring in a more modern approach to this.

Service-level encryption with bring-your-own-key is coming out. Not sure what this implies: encrypt everything for a given SharePoint Online tenant, or certain parts? We’ll also get conditional access policies per site. Hopefully we’ll hear more details on this later.

For Yammer, we’re getting quite a bit of new and long-awaited news. You can embed videos from Microsoft Stream or Office 365 Video now. Office 365 Groups Connectors will be supported, so that Yammer gets to use the existing connector infrastructure from Groups. And finally, Yammer starts supporting dynamic groups from Azure Active Directory for membership management. This feature does require Azure AD Premium.

In addition, we’ll be getting a new iPad App for Yammer, and later a real desktop app for Windows and Mac. For a video on Yammer-related changes, see here.

Microsoft provided a nice list of videos from today’s announcements. You can view the list here. The videos include an overview of SharePoint communications sites, new personalization functionality, admin controls for SharePoint and OneDrive for Business, SPFx Extensions, PowerApps and Flow intro, SharePoint 2016 cloud coexitstence and updates to Yammer.

This was mostly what I was expecting. I was slightly disappointed that several critical features were just briefly mentioned, that I felt should have been given more thought. This is especially relevant for the service-level encryption with BYOK, and SharePoint Framework Extensions. In the end, I tried to keep track what was released today and in my count, nothing. Some visibility, some vision, but more or less majority of the new features are coming “this Summer” or “in a few months”. Maybe this is for better, as we’re still digesting news from Build.

Thanks for reading! I hope this was a useful recap!