At the recent SharePoint Saturday Netherlands 2016, I had the pleasure of co-presenting a session about building solutions using the SharePoint Framework.

At the recent SharePoint Saturday Netherlands 2016, fellow-MVP Albert-Jan Schot and I presented a session about leveraging the latest developer opportunities for building SharePoint solutions.

In this demo-packed session we will show you how to leverage the latest developer opportunities for building Office 365 and SharePoint solutions. You will learn about Angular, React, TypeScript, npm, WebPack and more! It’s a must-see session for every dev

What is SharePoint Framework?

Step-by-step we went through the process of creating a new SharePoint Framework project, moving over Angular files, loading dependencies and installing additional Webpack loaders for including CSS files in the generated bundles. The goal of the first part of the demo was to migrate existing Angular Web Part to the SharePoint Framework using the least effort possible. 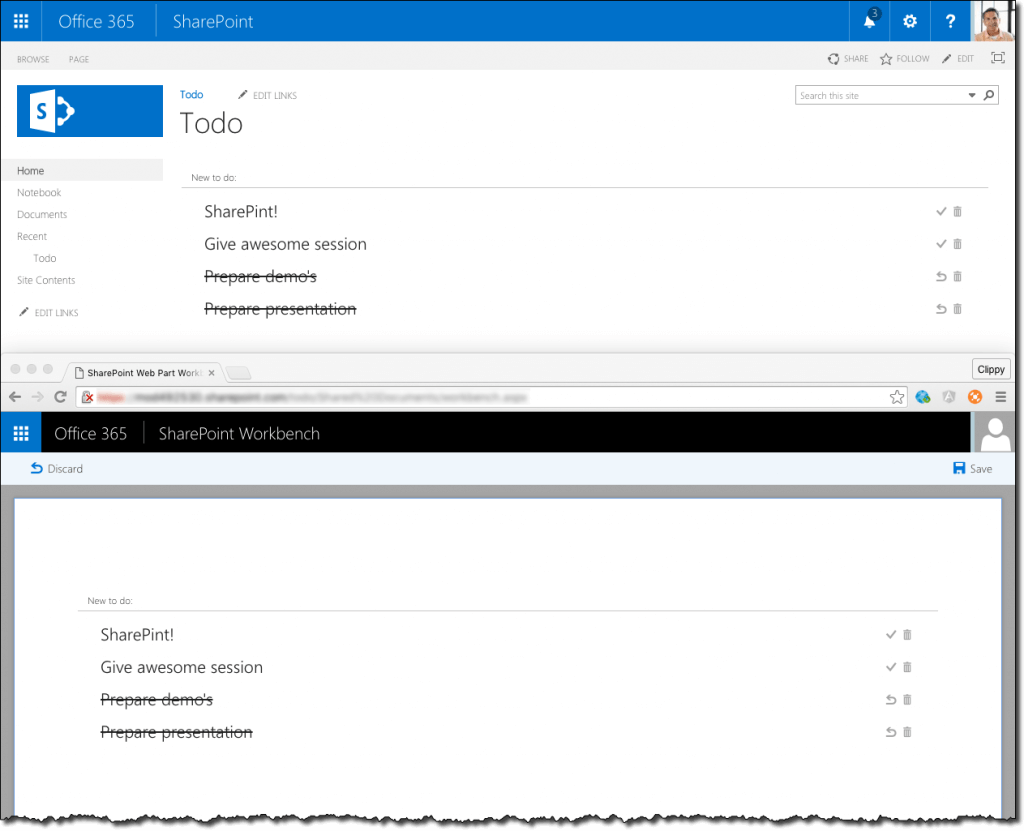 The source code of the demo Angular Web Part before migration is available on GitHub at https://github.com/waldekmastykarz/demo-sharepoint-todo-angular.

The sample Angular Web Part contained some properties for configuring the URL of the SharePoint site and the name of the List where the todo items are stored, and whether it should show completed items or not. Originally it was only possible to set these values in code.

In the second part of the demo, I showed how you can leverage the Web Part framework and expose these properties in the Web Part Property Pane making them configurable by content managers.

At some point during the demo I started getting the angular is undefined error which I haven’t seen before, while preparing the demo. The error seemed to appear randomly. At first I suspected it being caused by the SharePoint Framework cache, but it turned out to be something different altogether.

In the demo Web Part I chose to load Angular and ngOfficeUIFabric as external scripts rather than including them in the Web Part bundle. One thing that I didn’t do, was to specify that ngOfficeUIFabric depends on Angular. Depending on the timing, sometimes ngOfficeUIFabric would load before Angular. Missing Angular it would cause the angular is undefined error to be thrown.

This mistake on my part illustrates an important thing to keep in mind when you start developing on the SharePoint Framework. Not only are you responsible for loading required modules but also for managing dependencies between them.

Overall both Albert-Jan and I enjoyed giving the session a lot. We were very happy with the great turnout and were pleasantly surprised how many attendees already knew about the recent announcements and the tooling used when developing on the SharePoint Framework.

Here are the slides that we used during our presentation:

The Future of SharePoint – better with Rencore

SharePoint Saturday Netherlands ’16 was also a very successful event for Rencore. We had the opportunity to talk to partners and customers about their SharePoint and Office 365 solutions and show them how our offerings could help them make the most out of their investments today but also in the future when building solutions on the SharePoint Framework.

Microsoft Teams as a (Power) Platform

Webinar Q&A: Cloud Collaboration – What admins need to know in 2022