Usually the Microsoft office Munich is closed on Saturdays, the big atrium is empty and it’s quite quiet in one of Munich’s office districts. Not so on this past Saturday, when doors were open for 430 SPS Munich attendees and 24 world renowned speakers.

But, let’s start from the beginning

After some of the most awesome speakers of the SharePoint world had confirmed to come and give a session at SharePoint Saturday Munich, we wondered: Why not organize a full day Pre- Conference sessions the day before the event? No sooner said than done. While the Rencore team was preparing for SPS Munich, almost 100 developers and IT Pros got the chance to either attend the session “PnP all the way”, held by Waldek Mastykarz, Radi Atanassov, Erwin van Hunen, Vesa Juvonen and Paolo Pialorsi or Thomas Vochten’s workshop “SharePoint 2016 Infrastructure Powerclass for admins”, assisted by no other than Jason Himmelstein and Erwin and Paolo from the PnP workshop.

Saturday – it’s all about the sessions

Vesa Juvonen and Eric Shupps kicked of SPS Munich by discussing SharePoint Futures in their keynote in a very entertaining way. Some big thanks go to those two for filling in for Chris McNulty who unfortunately had to cancel on short notice. After the keynote, SPSMUC was basically all about the sessions. They ranged from Business sessions like Jasper Oosterveld’s “The key to a successful Office 365 implementation is adoption” to Stefan Goßner’s IT Pro Track “SharePoint Patching demystified”.  The sessions ended with a very well attended panel discussion and with the speakers having the obligatory bottle of beer while discussing Groups, Teams, Conversations, Skype and Yammer (say what?). 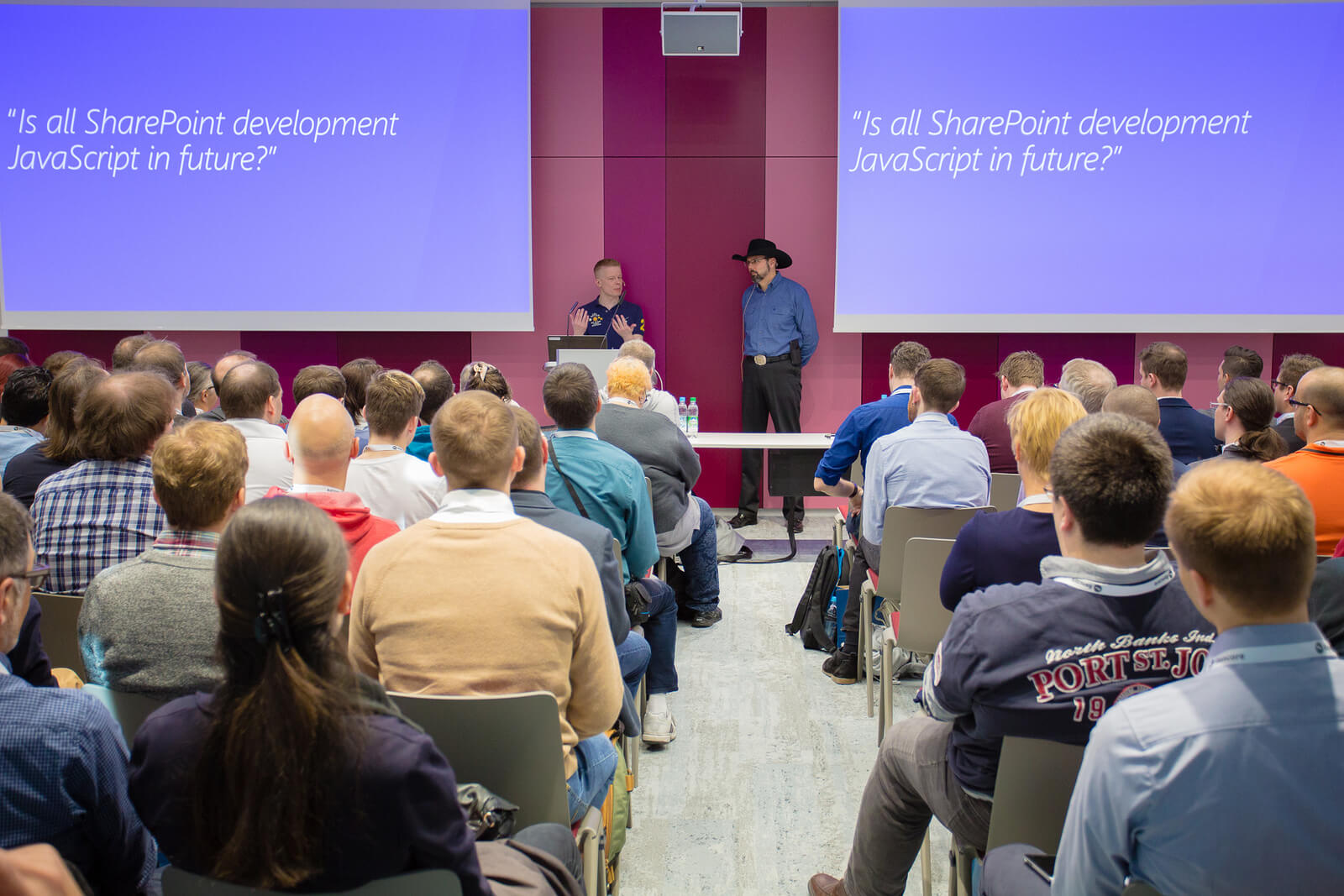 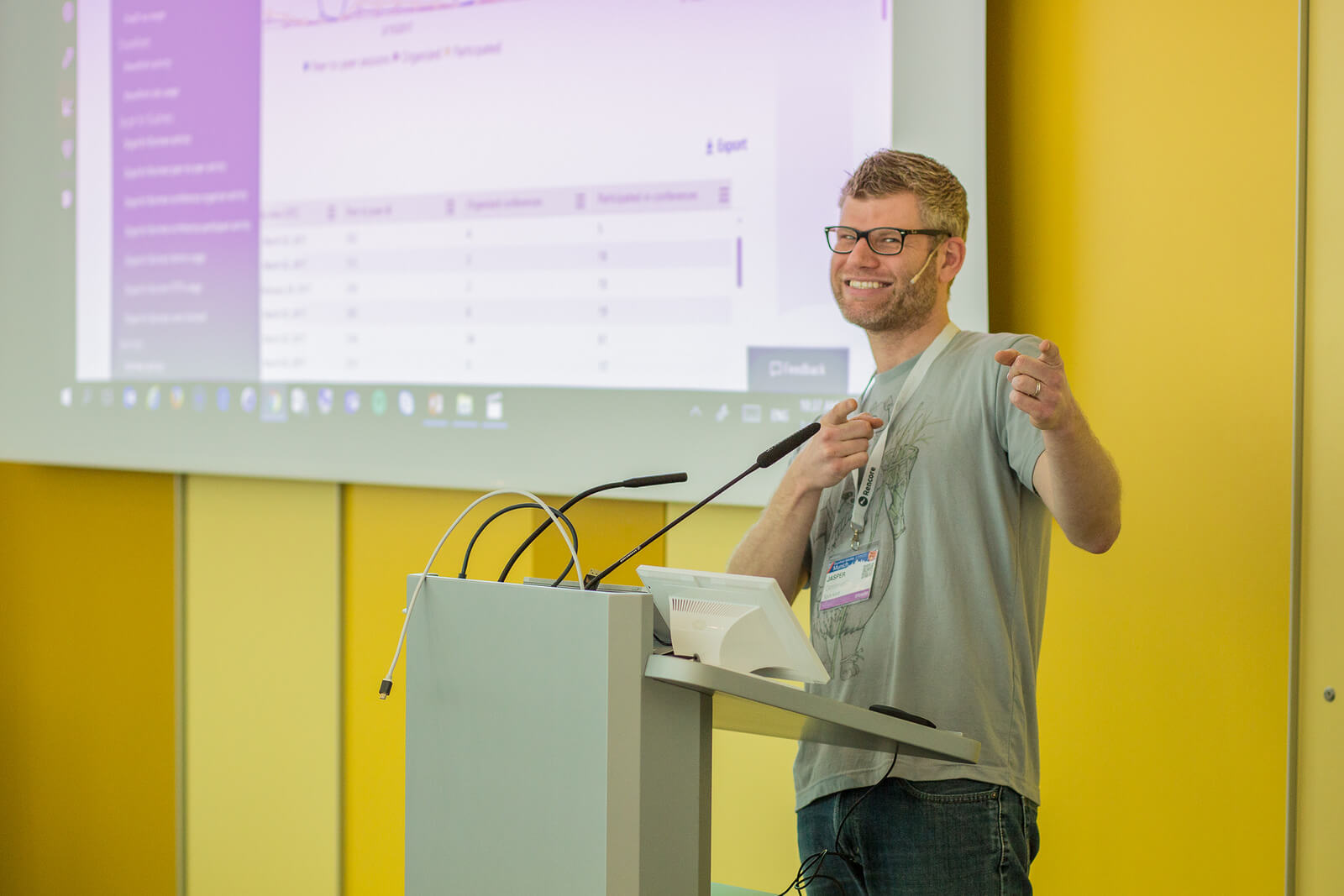 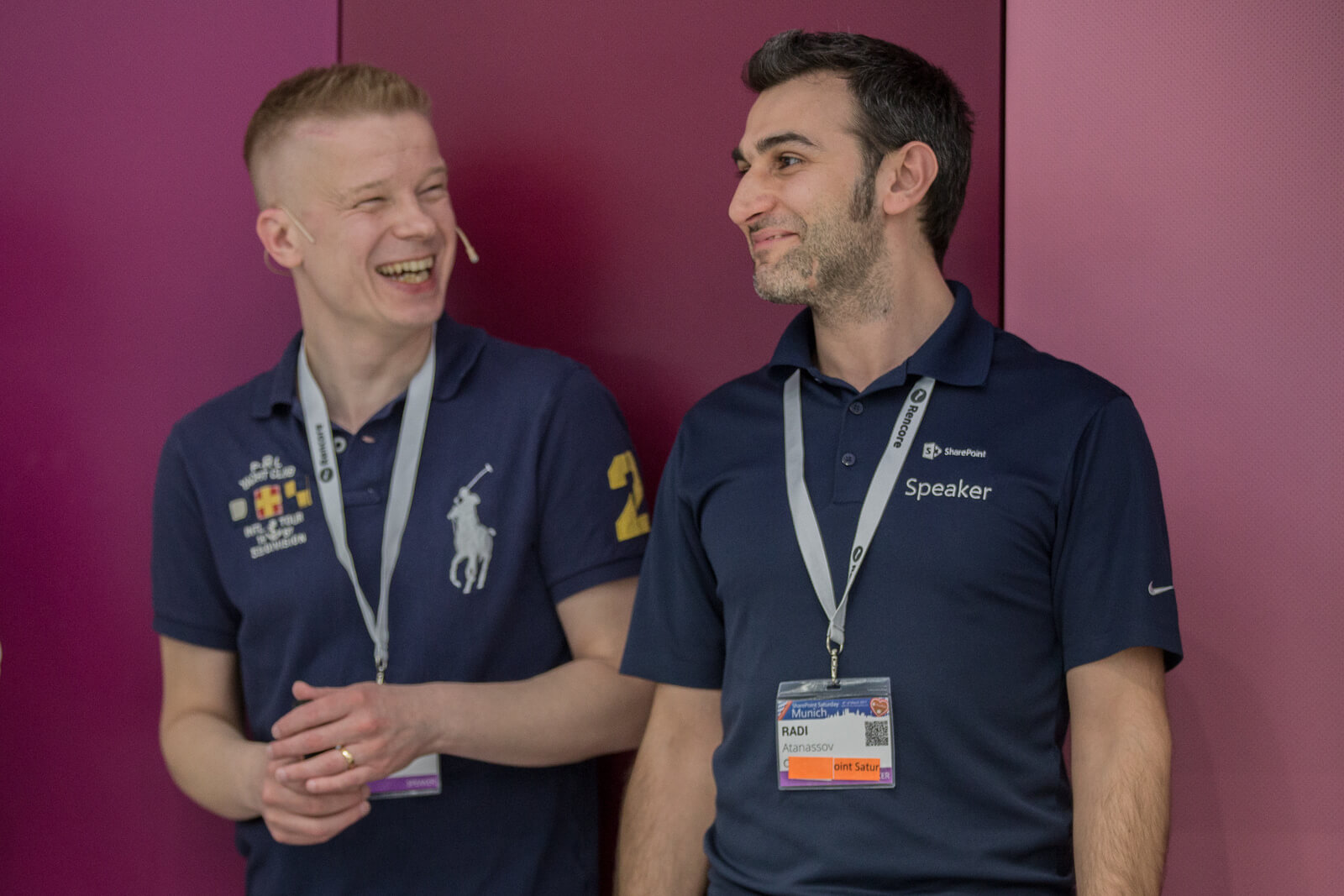 Shoutout to our speakers!

They’ve travelled to Munich from as far as Texas to support the SharePoint community. Thank you for making SPS Munich possible in the first place. Your efforts were being much appreciated!

Since our attendees were super excited about the sessions, as usual they keep asking us about the presentation slides. Most of the speakers have published their presentations by now and we will update this list once the remaining are available. Please find them at the following links:

Another thank you goes out to the SPS Munich sponsors who made it possible for us to throw an event like this. Most of them also set up a booth in the atrium of the Microsoft office and allowed the attendees to catch up on the latest SharePoint tools and news. Our sponsors have neither avoided cost nor effort: Their booth personnel arrived from afar (some of them even from Canada) and most sponsors even threw in an awesome prize for the grand raffle.

What would we have done…

…without our awesome IF- Blueprint volunteers. Not only did they support us at the day of the event but also helped us with the last preparations on Friday. Thanks a lot, guys. You rock! 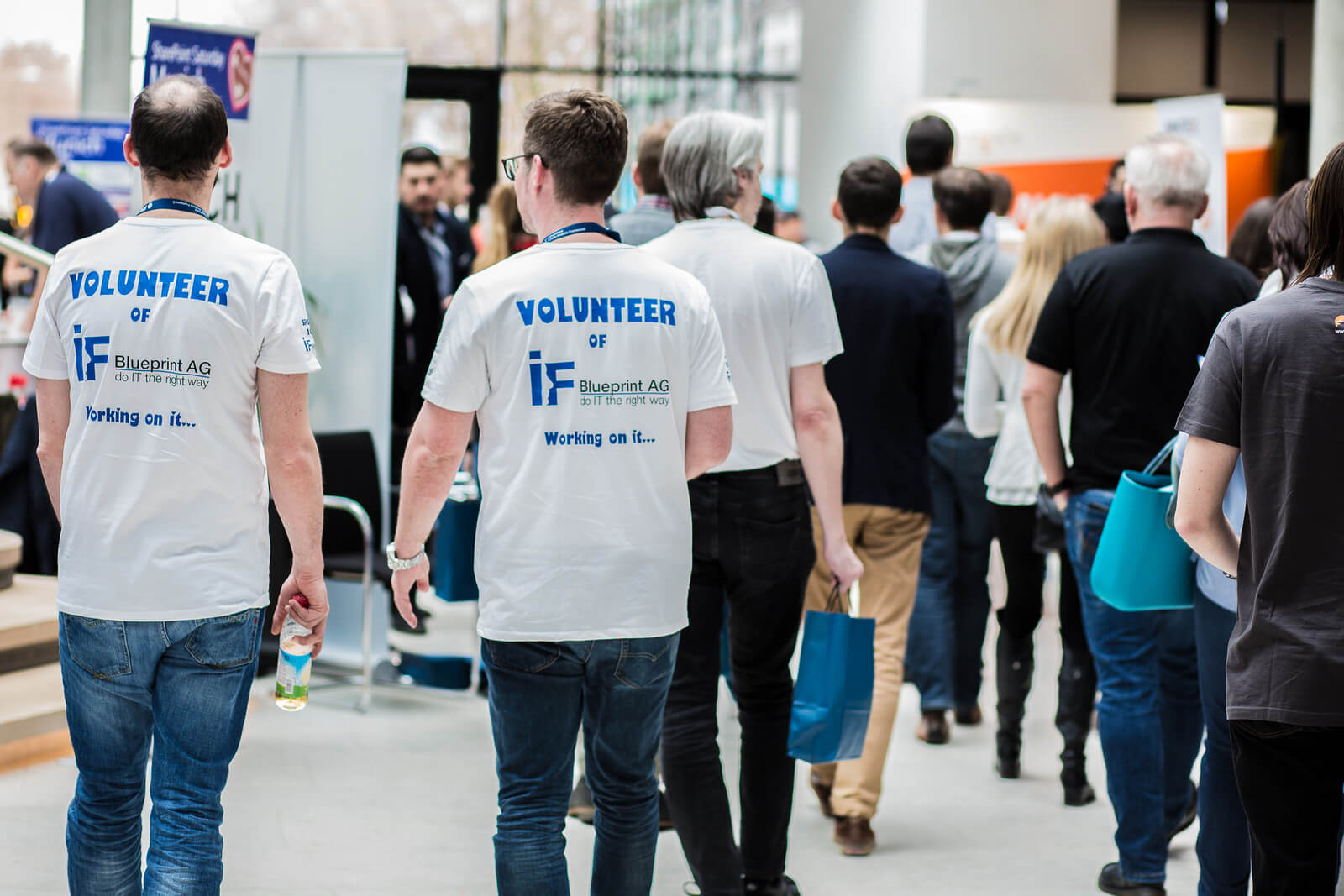 Stay for a SharePint. Or two.

It’s safe to say that the SharePint has become a tradition among the SharePoint community. And where would you have a beer or two if not in Munich – the home of beer. So, most of the attendees, speakers and sponsors stayed to mingle and chat. 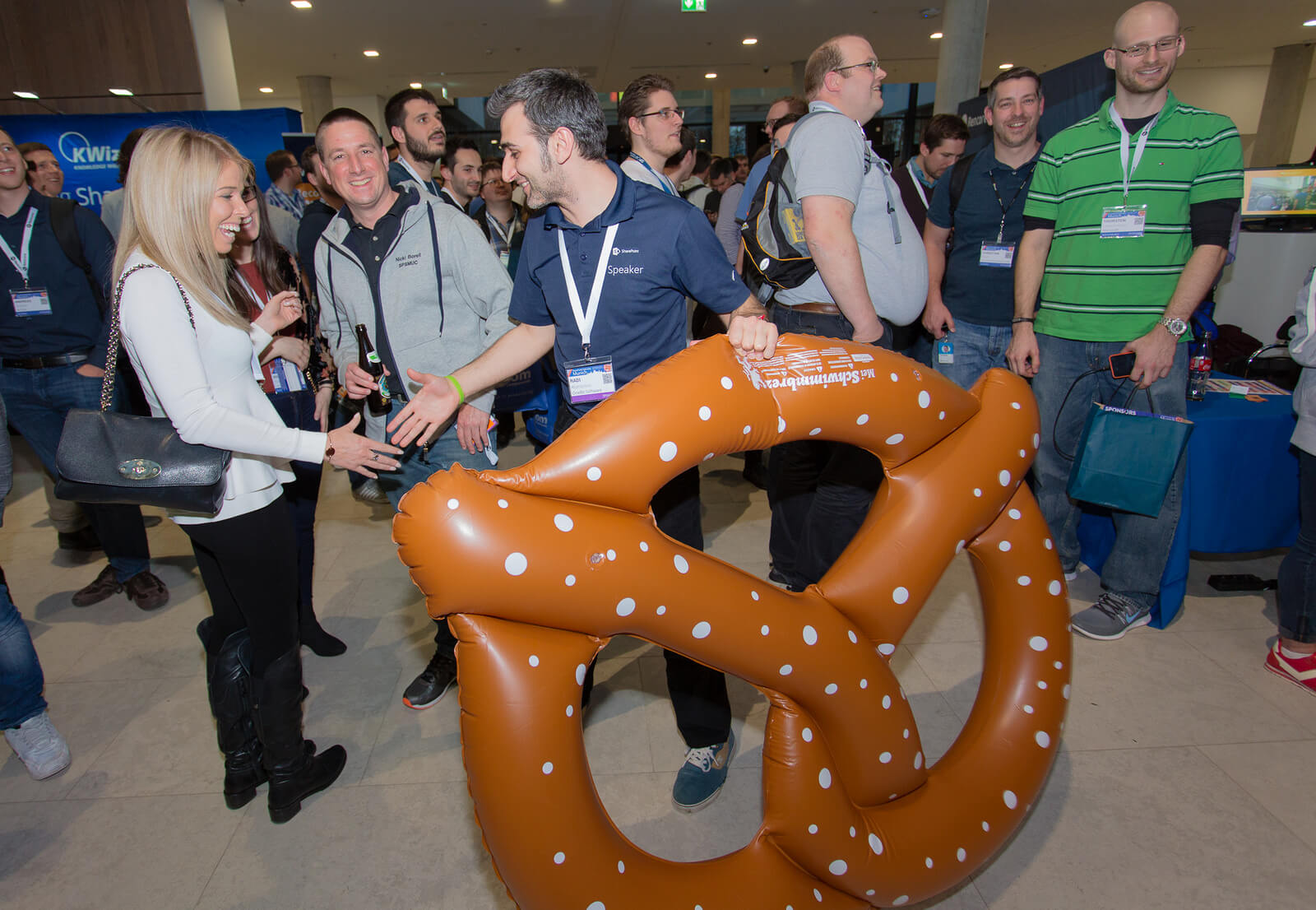 See you at next year’s SPS Munich!

It only remains for us to say that, as last year, it was an honor to host SPS Munich! Did we have a hard time? Yes! Did we have a ton of fun organizing this event? For sure! Will we do it again? We wouldn’t miss it for the world! 🙂 Danke!

You can find all pictures taken by our photographer Matt Hughes from Kinetal on our Flicker site. 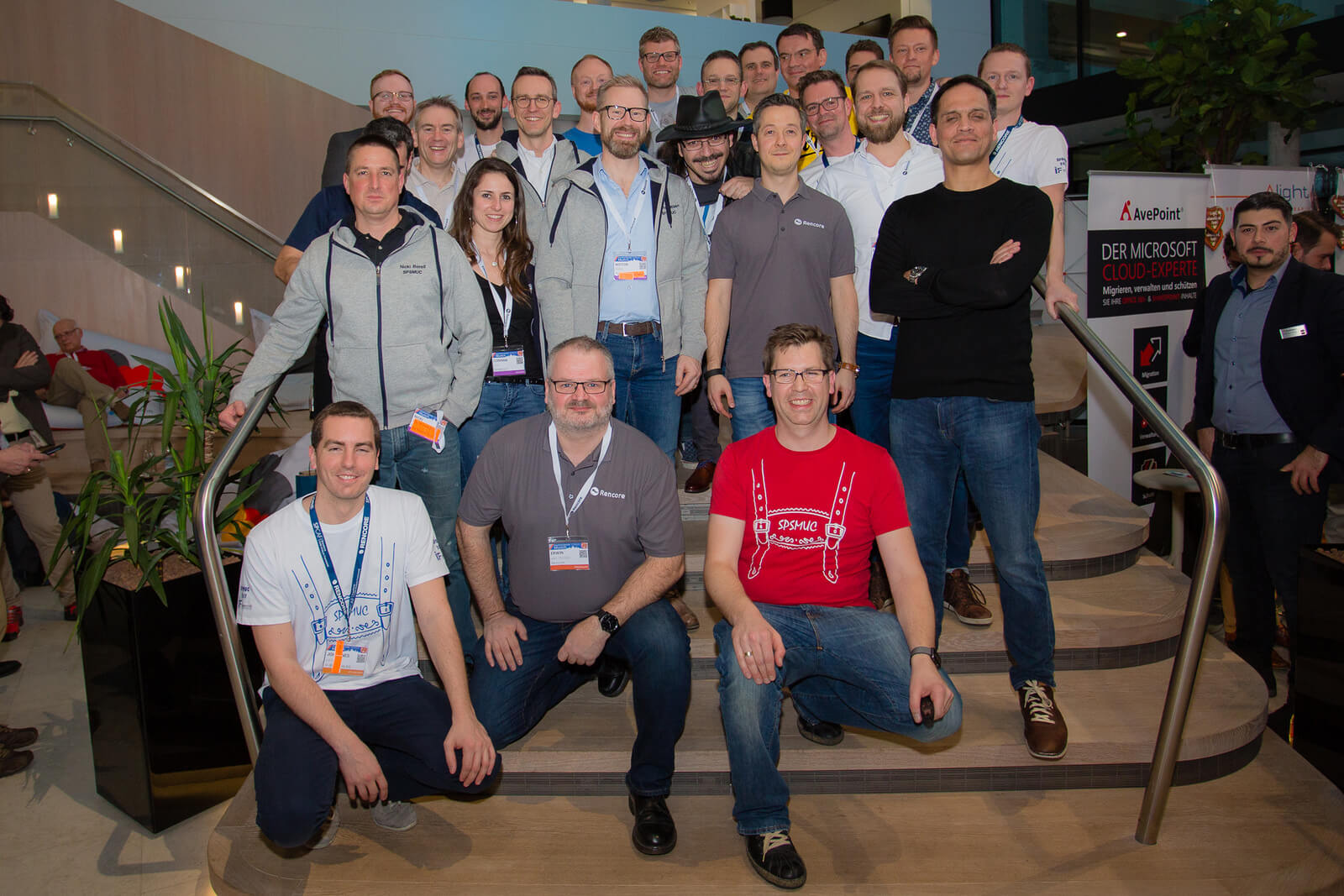