Stockholm – Been There, Done That, Got the Award

No, not the Nobel Prize. At least not yet! Rencore won the Pioneering Award for Start-up Excellence at the European SharePoint Conference (ESPC) 2015 in Stockholm least week!

But let’s not get ahead of ourselves.

Last week, the Rencore team invaded Stockholm for ESPC 2015. The European SharePoint Conference is the biggest event of its kind in the old world and again was packed with celebrity speakers such as Microsoft’s Jeff Taper, Seth Patton, and Bill Baer. More than 1.500 people attended the conference and flooded the show floor, where they inevitably stopped by the Rencore booth to learn about the latest SPCAF release v6 and its new features, get a demo, stock up on SPCAF swag or simply chat with the guys. Getting the chance of entering the Rencore raffle to win a cool Lego Truck might also have added to the crazy amount of visitors we were happy to welcome at the booth. 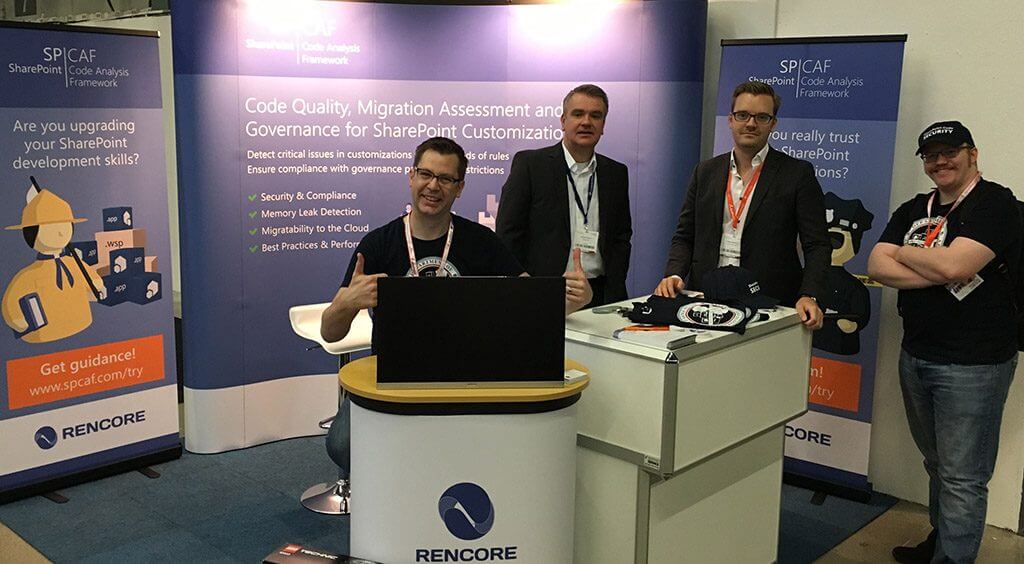 When not roaming the exhibition area, the attendees crowded the 100+ sessions. And we are pleased to note that Rencore’s own Matthias Einig and Hugh Wood turned out to be somewhat of a loadstone, drawing sell-out crowds to their sessions.

Take a Chance on Custom Code 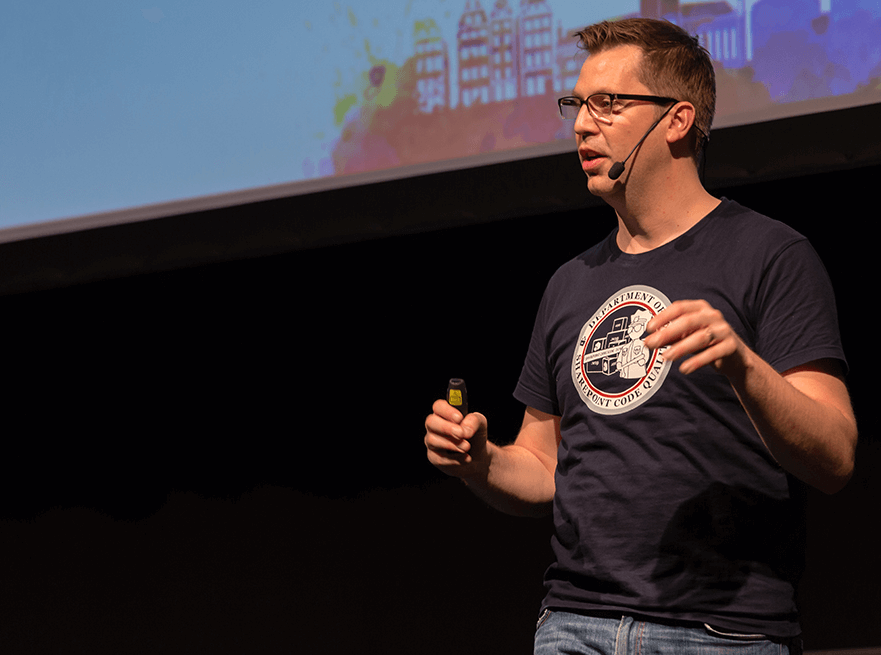 He went on to explain the need for a broader approach towards SharePoint Governance and showed how SharePoint customizations need to be integrated into everybody’s governance plan and how to enforce it.

In Matt’s second session Assuring the Code Quality of SharePoint Solutions and Apps, he elaborated on the formula: SharePoint development ≠ fun! Whether developing for an existing SharePoint solution or shifting the development approach to the new App model, SharePoint rookies and veterans alike find themselves confronted with many new technologies, frameworks, and coding practices. The result: a wide range of quality and maintainability levels of SharePoint solutions and apps, very much depending on the experience and preferences of the individual developers.

Rencore’s own Hugh Wood took a deep dive into coding, in his session JavaScript for C# Developers, Making the Move. He explained that C# developers often misunderstand JavaScript as a language. In doing so, it makes working with JavaScript harder than it should be, creating errors in applications and leaving behind a mess for people who follow. Having an extensive background in dev best practices, Hugh introduced the audience to ways of overcoming these obstacles, showing the latest APIs in context and implementing them, and applying these skills to future projects. 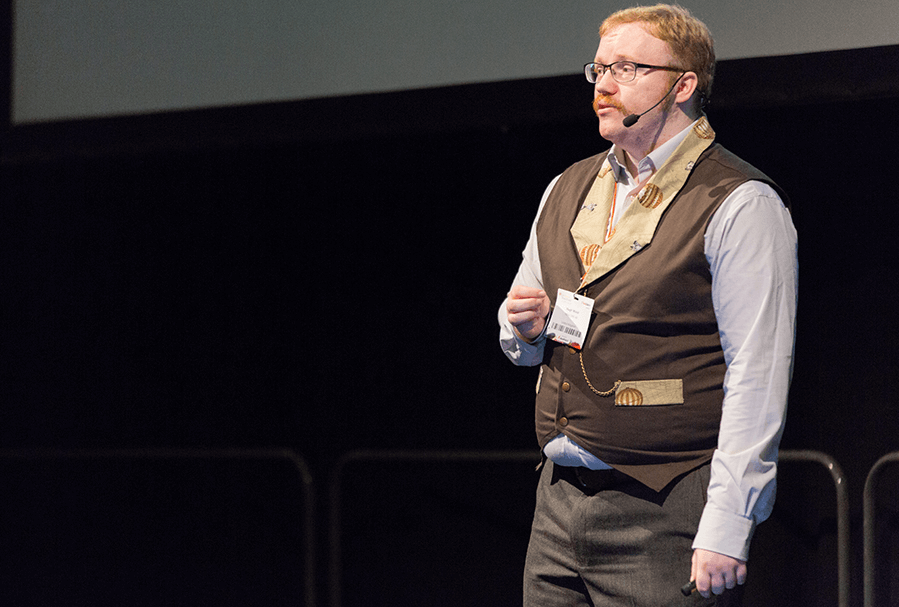 In somewhat of an emergency Matt was happy to fill in as a participant of the European SharePoint Conference 2015 MVP/MCM Panel Session for Dan Holme who called in sick – luckily only due to a slight cold. Discussing The Future of SharePoint in an Office 365 World, Matt joined globally recognised thought leaders Michelle Caldwell, Donald Hessing, Paolo Pialorsi, Chris McNulty, Bill Ayers and Christian Buckley for an interactive and engaging Q&A. 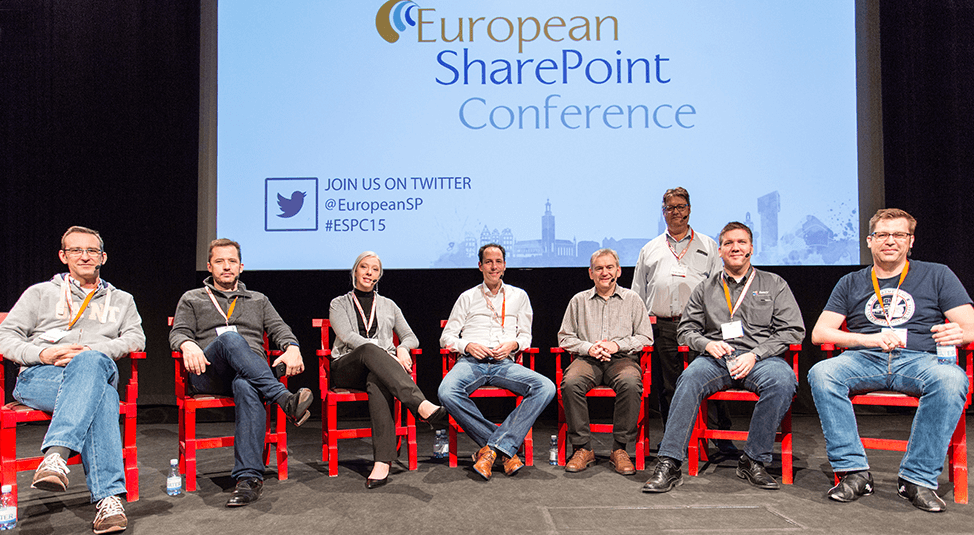 The main takeaway: Microsoft will continue to deliver on-premise SharePoint versions as long as customers want it.

Thank you for the music

Traditionally, on the evening of day two the Conference Awards Reception takes place. For Stockholm, attendees, speakers and partners were taken out to Stockholm City Hall’s magical Blue and Golden Halls, the very location where Nobel Laureates banquet with the Swedish Royal family after the Nobel Prize Award Ceremony.

Every year at ESPC the European SharePoint Community honours companies within the industry for their exceptional achievements. A jury of five industry veterans, helped by a public voting, decides on the awardees. In the category Pioneering Award for Start-up Excellence, Rencore was nominated. And after an apparently convincing finalists pitch during the day by Matthias Einig, and a likewise positive public vote, Rencore took home the award!

We would like to thank all voters, users, promoters, booth visitors, patrons and fans for your ongoing support and love! Winning this award would not have been possible without all of you SPCAF Cops out there!

The winner takes it all

Finally, we would like to thank all affiliates shooting for our Lego truck. You knew there could be only one. And it is this lucky fella in the picture below on the left! For all second winners: there is a little
consolation prize on the way. Just make sure to check your inboxes.

Editor’s note: we were fully aware that the home for the European SharePoint Conference – Stockholm – is also home to the world famous ABBA museum. Unfortunately, we did not make it there (amongst others). Therefore, we would like to pay tribute to this great band in a more subtle way. Do you know what we are talking about? Make a guess in the comments section below. The first right guess can earn some serious SPCAF swag!

Matthias, or Thias for the sake of distinguishing from all the other Matthiases here at Rencore, is the VP of Marketing at Rencore. He is passionate about helping make Microsoft 365 admins' lives easier by evangelizing about Rencore's mission, vision, and products.