Microsoft’s yearly developer event, Build, started today and the main keynote has just ended for day one. I couldn’t attend Build this year myself, so I decided to tune in to the keynote remotely to understand what’s new and relevant in the future.

In this post I aim to recap and highlight the important announcements and releases from tonight’s keynote, and hopefully I’ll be able to capture the essential technical information as well. Let me know in comments or on Twitter your thoughts! 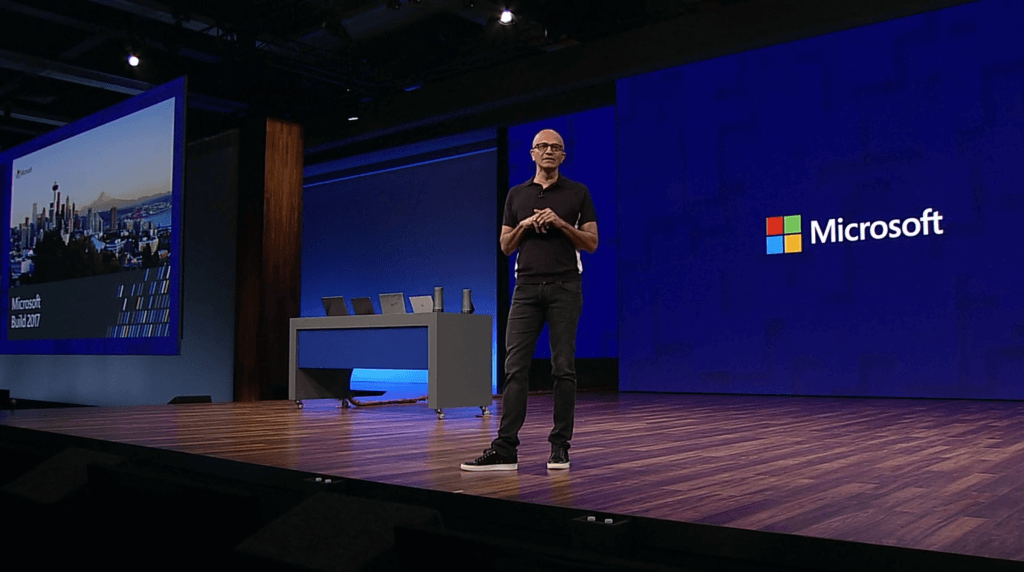 I’ve always liked Satya Nadella’s public appearances. His presentations are easy to follow, and he seems at easy on stage. Typically in events such as Build the keynote paints the overall theme for upcoming announcements and the event in general. The first 15 minutes or so focused on Microsoft’s mission.

During the first demos, which you can fast-forward on Channel 9, we saw a demo on AI detecting workshop tools in realworld. Impressive, but maybe a bit vague as nothing is available today. Promise was that more would be shared in the next 12 months.

Nadella continued by talking about Microsoft Graph, and how it relates to Office 365 and people. Especially to activities, devices and intelligence. Graph Explorer was updated just recently and it’s great now with intellisense and sample queries. Meetings is one example, on how people need access to different kinds of data and information with multiple devices. 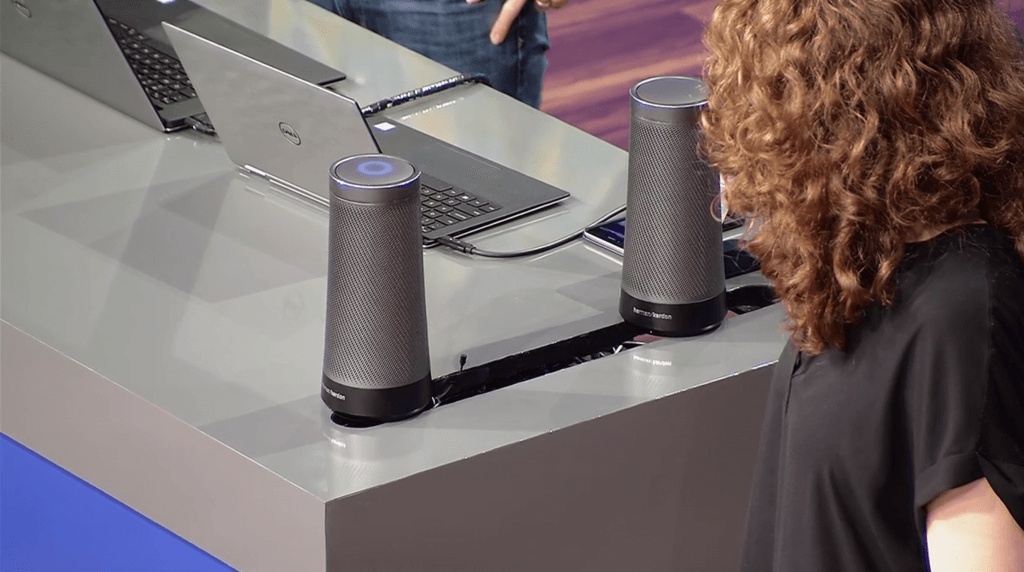 A demo was shown with the Harman Kardon Invoke, bluetooth speakers powered by Cortana. I’m still waiting for the day when Cortana works outside the US properly, and maybe also more intelligently for us non-English speakers.

ScottGu is definitely capturing the general feeling I hear from many of my colleagues and customers: so much happening, and it’s getting very hard to be up to date on new technologies. 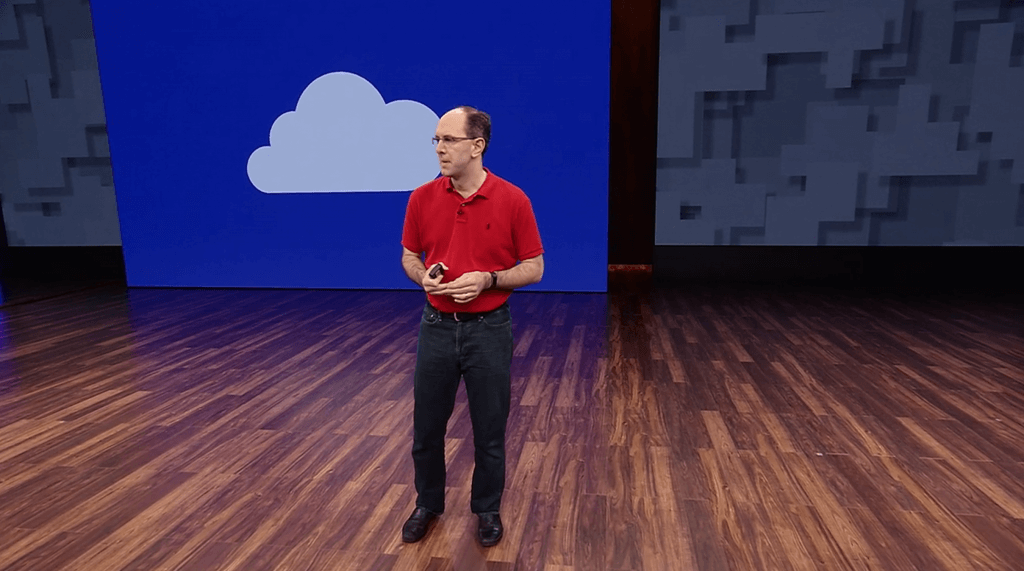 And now we move straight to Scott Hanselman! He is showing a Visitors App on Azure and also the new Azure Cloud Shell that supports both Bash and PowerShell (coming a bit later). This has been teased for about a week on Azure Portal, and the sneak peek was published back in December. Azure Mobile app is also announced and seems to be already available for iOS and Android. UWP-version for WP devices is coming later. 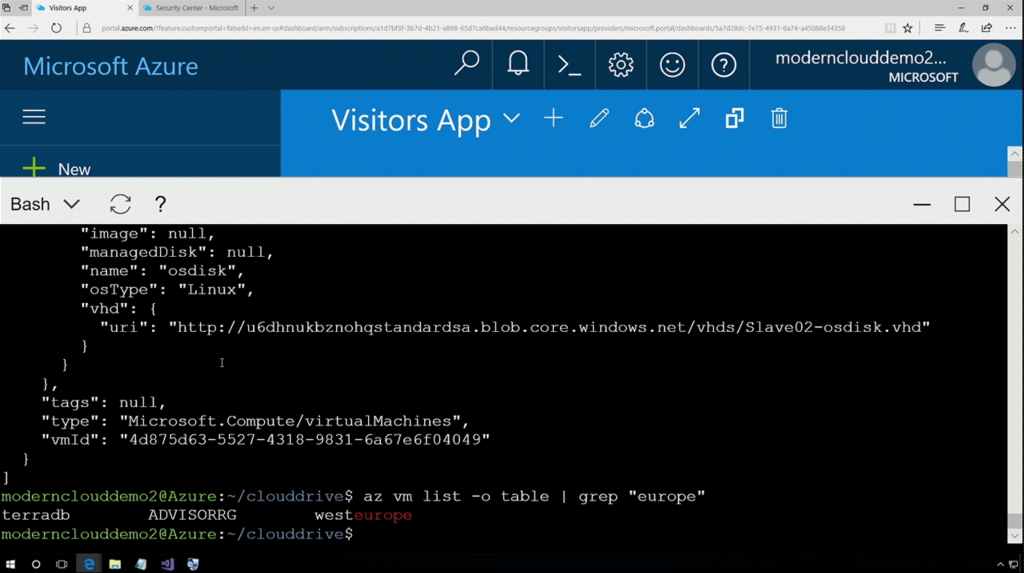 Visual Studio for Mac was also announced, see announcements below for direct links.

Back to Scott Guthrie and SQL Server 2017, which, as we know from earlier announcements this year, is coming out at the same time for Linux, Docker and Windows. A new Azure Database Migration Service was announced, which promises “near-zero” downtime migration from Oracle/SQL Serve to Azure SQL. 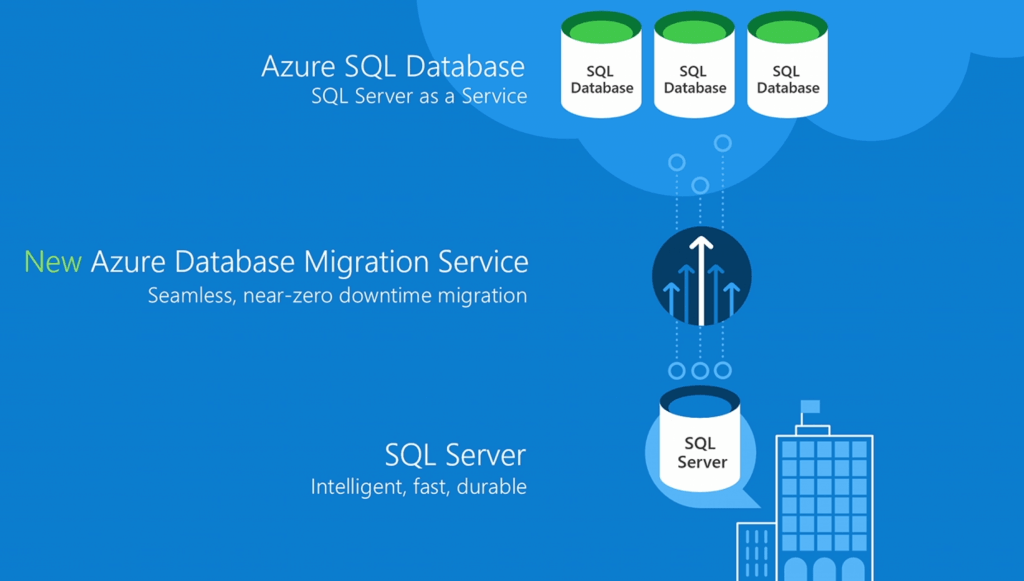 In addition, database services in Azure get two new additions: PostgreSQL as a Service and MySQL as a Service. Hopefully this means we’ll get a robust MySQL service from Azure now, as the current solution has been a bit unstable.

We also got a demo on Azure Cosmos DB, which I’ve further elaborated below. Nothing out of the ordinary, but it will definitely makes large, globally available databases much easier to handle.

Modernizing applications with containers is next. Visual Studio 2017 has integrated Docker container support. Containerization seems to be one of the buzzwords, but it’s also something that many companies are not aware yet. A demo to bring better awareness for Docker support within Visual Studio was shown – and it definitely does look almost too easy. 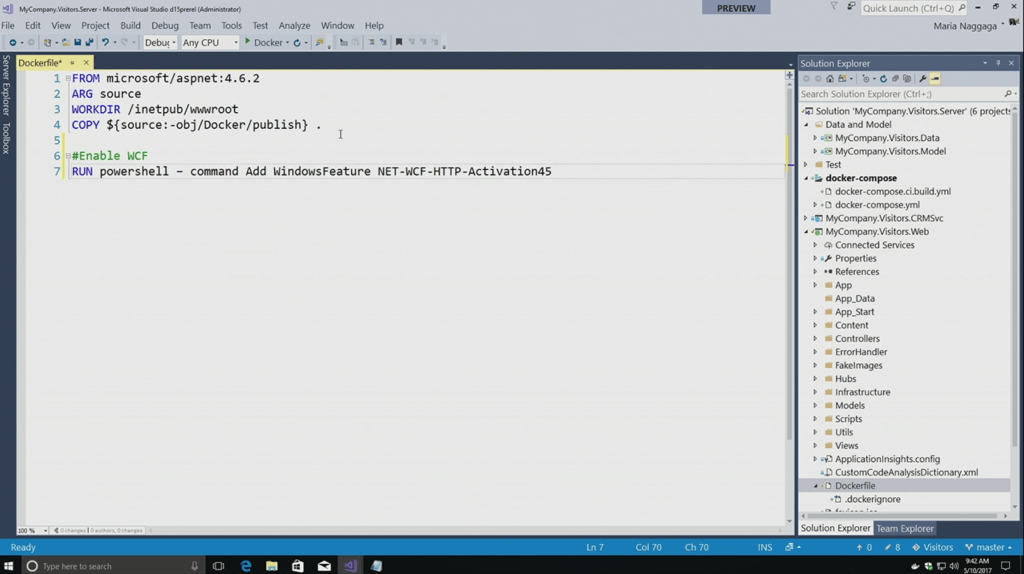 Service Fabric next, and it now runs on Azure and Azure Stack (which presumably is coming later this year, now in Technical Preview). You can now deploy containers to Service Fabric, Container Service, Web Apps and Batch. This brings us to Serverless which was already hinted several times during Satya’s keynote kickoff. Visual Studio tooling support for Azure Functions and Logic Apps is announced.

Azure Stack time. I started listening to this keynote hoping we’d get more hard data on actual availability, pricing and models. Julia White on stage to demo Northwind Traders situation, my favorite company after Contoso and Fabrikam. She talks rapidly. 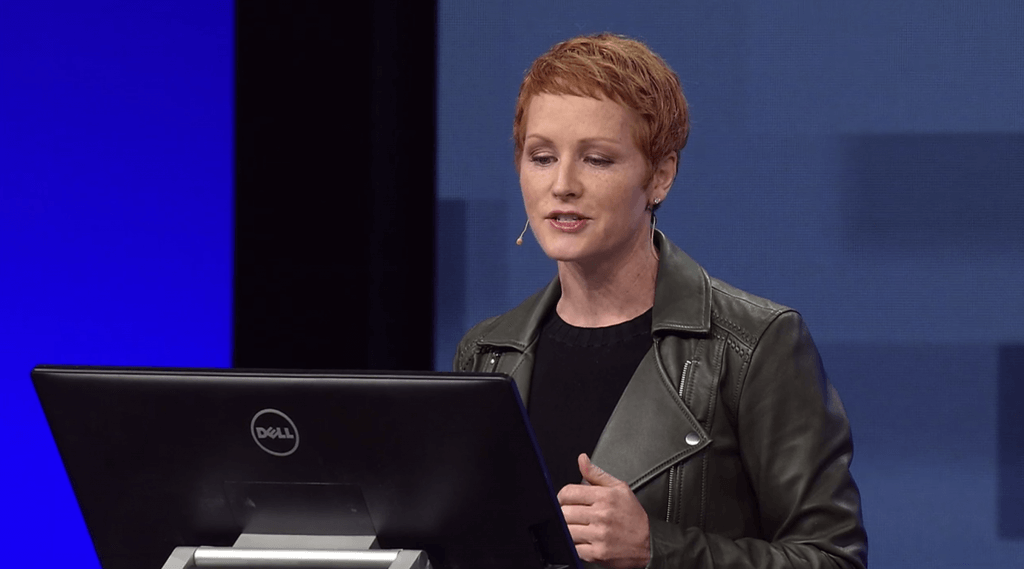 Moving on to AI, and Microsoft Cognitive Services. 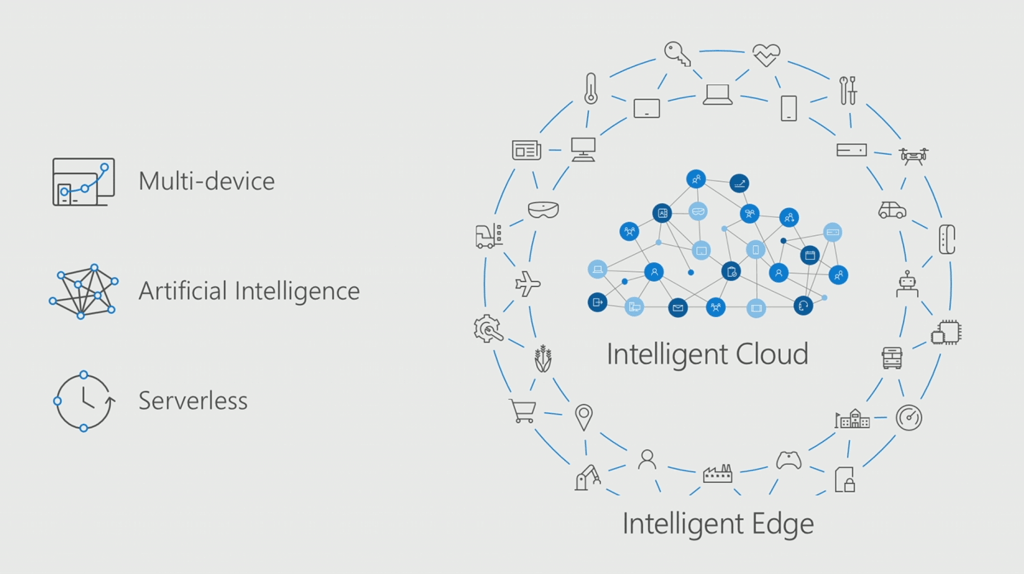 “The time for AI is now”, says Harry Shum. A few new APIs were released, one for video indexing and another for Cognitive Services Labs. Documentation is available here. 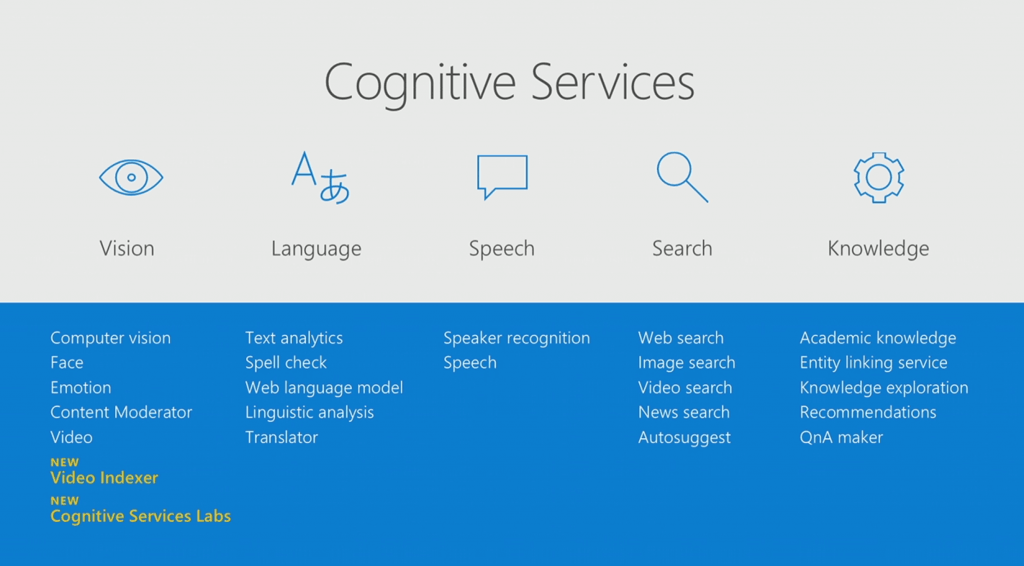 Bot Framework gets 3 new channels: Skype for Business, Bing and Cortana skills. Also Adaptive Cards introduced, allowing nice looking visual cards during bot conversations. Yina Arenas next up to demo Office with some more intelligence. Presentation translator is up first, and it is impressive. Translating from one language to another in realtime, and it seemed to work pretty quickly too. It should be available at aka.ms/powerpointtranslator but I’m only getting an invite-only list for now. More AI stuff at microsoft.com/ai.

First announcement I spotted was Azure Cosmos DB, which is a globally distributed database service. It’s schema free, and intended for everything – but probably for use cases where you need to store and manage massive amounts of data with fault tolerance. To me this feels like a new evolutionary release of Document DB. You can also choose whether to use SQL, MongoDB, JavaScript, Gremlin (Graph) or Azure Table Storage for the API. Find Cosmos DB on the Azure Pricing Calculator and further documentation available here. The docs also state that existing DocumentDB users are seamlessly transitioned to Cosmos DB. A technical overview is also available.

Azure IoT Edge was next, and it’s a service that aims to bring ‘smart’ to the edge of your solutions. Think IoT on devices smaller than Raspberry Pi. You can sign up for the preview now. It’s an evolution from Azure IoT Gateway SDK and seems to be open source and cross platform. You can get the marketing speak here.

Azure Cloud Shell is now available inside the Azure Portal. It’s an embedded Docker containerized shell that runs Bash scripts, and later also PowerShell. I verified and it seems to be rolling out on my Azure tenants as well. Marketing info here.

Visual Studio for Mac is now generally available. You can download it here.

Azure Mobile app is available now for iOS and Android.

Azure Database Migration Service was announced, and it’s promised to be a service with “near-zero” downtime when performing database migrations from on-premises databases such as Oracle and SQL Server to Azure SQL.

PostgreSQL as a Service and MySQL as a Service are two new offerings. Both are already listed on the Pricing Calculator here and they seem relatively cheap for basic use (around ~13-15 eur/node/month).

Visual Studio tooling support for Azure Functions and Logic Apps is released. These were in preview before and very unstable – definitely need to test this again!

Azure Applications Insights for Functions is announced. I think I saw this already yesterday, but the official announcement was made during the keynote.

It was a busy keynote. At times, maybe things could have been paced a bit better and at other times, there was so much to share that I found it challenging to keep track on all the announcements and releases.

I hope that you found this recap useful and of value!

The rise of Power Automate: Robotic Process Automation (RPA) in the digital ecosystem

What is a power user in Microsoft 365