5 years… when I was a child, five years seemed a lifetime. A whole period of secondary school – a world cup or an Olympic Games would have passed, but once you reach your 20s and beyond, time just flies by. It’s not until you recognize a milestone and take the time to reflect on it do you sometimes realize what’s been achieved in that period.

Take business as an example. I truly believe that the business world is in its own time vortex or black hole. Time seems to pass in your organization at a totally different rate to the rest of the world. It’s not until you take some vacation that you realize – where did the time go?

I think this is because when you work for a good company and are enthusiastic about that common goal, you want to do your utmost to achieve and make deadlines. You work the task and see your contribution building the bigger picture – if you are lucky to work in a company that believes in transparency. Time blends together and you enjoy going to work. You become more intrinsically motivated instead of focusing on the extrinsic benefits – although money sure does keep a roof over your head.

The reason why I’m talking so philosophically is that Rencore is this type of company and celebrates its five-year anniversary this month. So much has been achieved in that time. Rencore was only one year old when Germany won the world cup in Brazil! Where’s the time gone? Well, much of what Rencore was built on started long before, so let’s take a trip down memory lane and look at some serious and not so serious milestones!

After Torsten and Matt built an early incarnation of SPCAF to help the clients for whom they consulted for, the decision was clear – SPCAF should become a commercial product to help SharePoint customers all over the world with its analysis capabilities. However, there was a long way to go before such a toolset, that started off as a free-time project, could become an actual commercial product. They quickly realized that they could not make it alone. Therefore, Torsten took a career path to further his understanding of SharePoint, the platform that Rencore would be based on, which led him to Microsoft, and Matt founded Rencore GmbH. 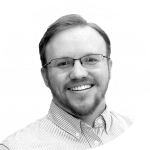 Hugh Wood was the first employee to Join Rencore and I caught up with him for a chat during the week to find out when his ‘where were you’ moment… was – try saying that fast three times!

Just over four years ago, I was moderating at the SharePoint Community, which was run at the time by Mark Jones, Vlad Catrinescu, and Matthias Einig. Mark had this crazy idea of doing a 24-hour long conference online, spanning across every time zone. We did it, and this was the first time I met Matthias Einig in person and not through messaging online. We got on immediately, and we had a great time at that conference. Afterwards, I must have impressed Mark and Matthias as I received job offers from both, and I had to think it through in detail. My background was and still is in deep dive development so the decision was easy for me. I chose Rencore as my new home and the rest, as they say, is history. 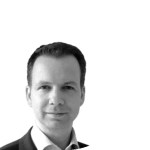 Torsten Mandelkow is co-founder and CTO at Rencore. He may not be in the limelight as much as some of our other colleagues, but those in the know understand that he is a visionary and a pioneer. Torsten started to implement the first version of SPCop in his spare time to analyze SharePoint solutions and used it to run automated code reviews for customers with Matt. Having this tool in hand, Torsten and Matt had several great customer engagements and SPCop began to grow. They both worked on developing the tool and an early incarnation of SPCAF was born. As mentioned earlier, Torsten took a job at Microsoft to further his understanding of SharePoint, but he was destined to come back to Rencore.

Every year at the European SharePoint & Office 365 Conference (ESPC), the European SharePoint Community honors companies within the industry for their exceptional achievements. A panel of five industry veterans, helped by a public vote, decide on the awardees. Back in 2015, Rencore won the ‘Pioneering Award for Start-up Excellence.’ This was a fantastic achievement for a company who was only two years old. This set a benchmark for Rencore’s rapid ascent in the coming years.

Within the space of seven months, three MVPs: Tobias Zimmergren, Erwin van Hunen and Waldek Mastykarz joined Rencore, and as of March 2016, Rencore’s roster had a total of four MVPs, Matt included. Led by Torsten, they began refining and shaping our current customization solutions: Governance, Transformation and Security. Being awarded the MVP title means Microsoft recognizes and values the continued good work that these individuals contribute to the Microsoft community. Having these dedicated individuals navigating our ships brings a level of reassurance and quality that we really appreciate and can learn from. 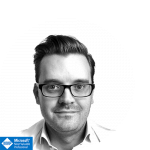 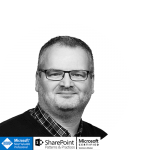 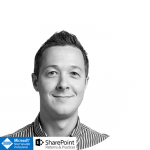 In May 2016, Rencore opened its first office. Needless to say, it was pretty small, but we had a headquarters and Munich became Rencore’s official home. This would be the first of three offices in the space of two years. It just shows how quickly Rencore has grown. Look at those happy faces! 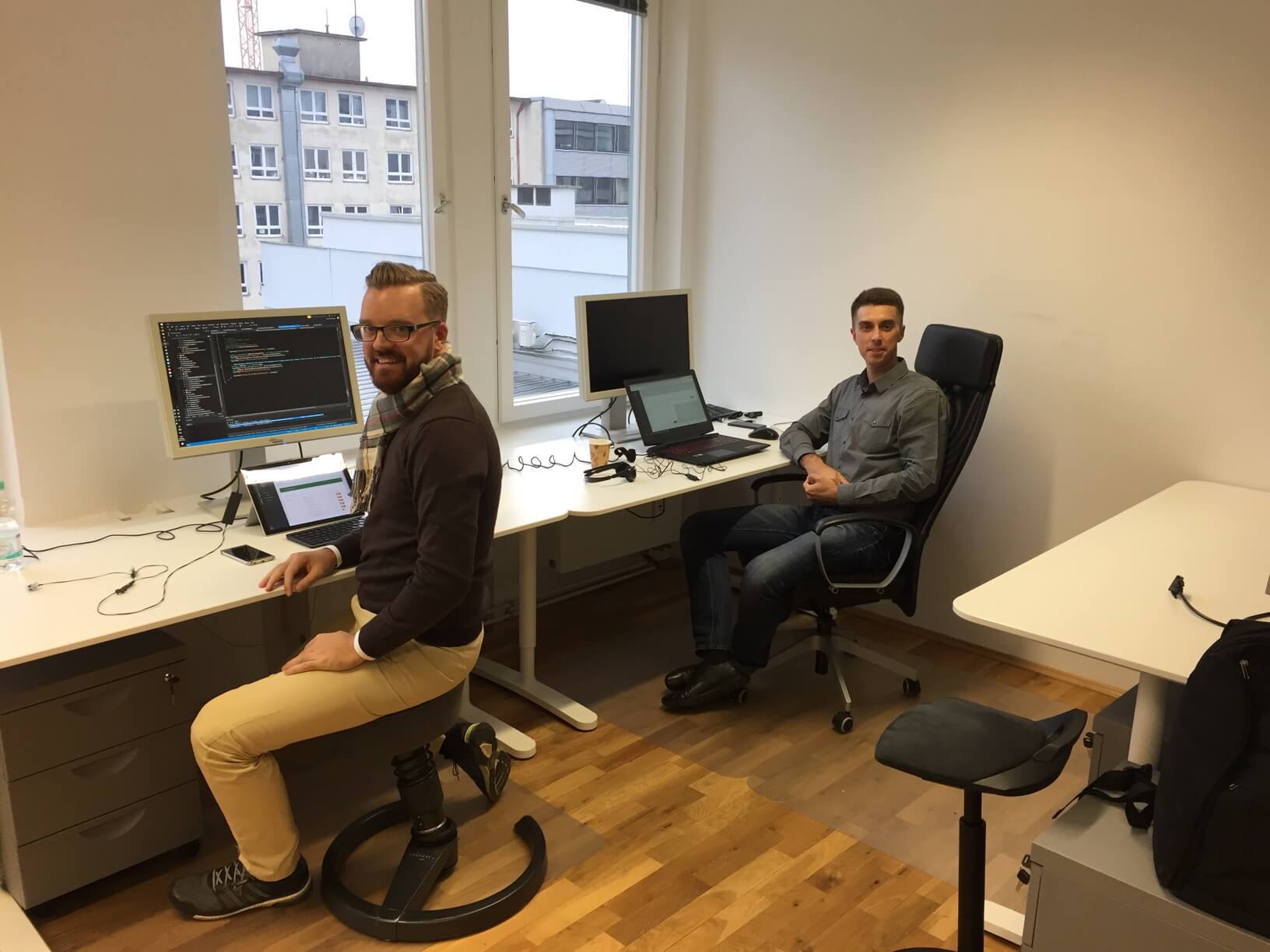 It’s interesting to find out where the Pretzel first made an appearance and how it positioned itself into Rencore folklore. As a newer member of Rencore, my research took me to an unpublished blog deep in the vaults titled: Rencore Road Trip Recap or The Rise of the Pretzel. So, I Believe this is where it all began! It feels a bit like the famous Atari ET game cartridge excavation – I have that same feeling of excitement! Anyway, I digress. Whilst Rencore was featuring at a string of events around late summer early autumn, this untold story was drafted around 23rd October 2016. So, by the end of 2016, the Rencore pretzel was so much more than just an inflatable event prop, it was a statement – about what, we can only fathom. 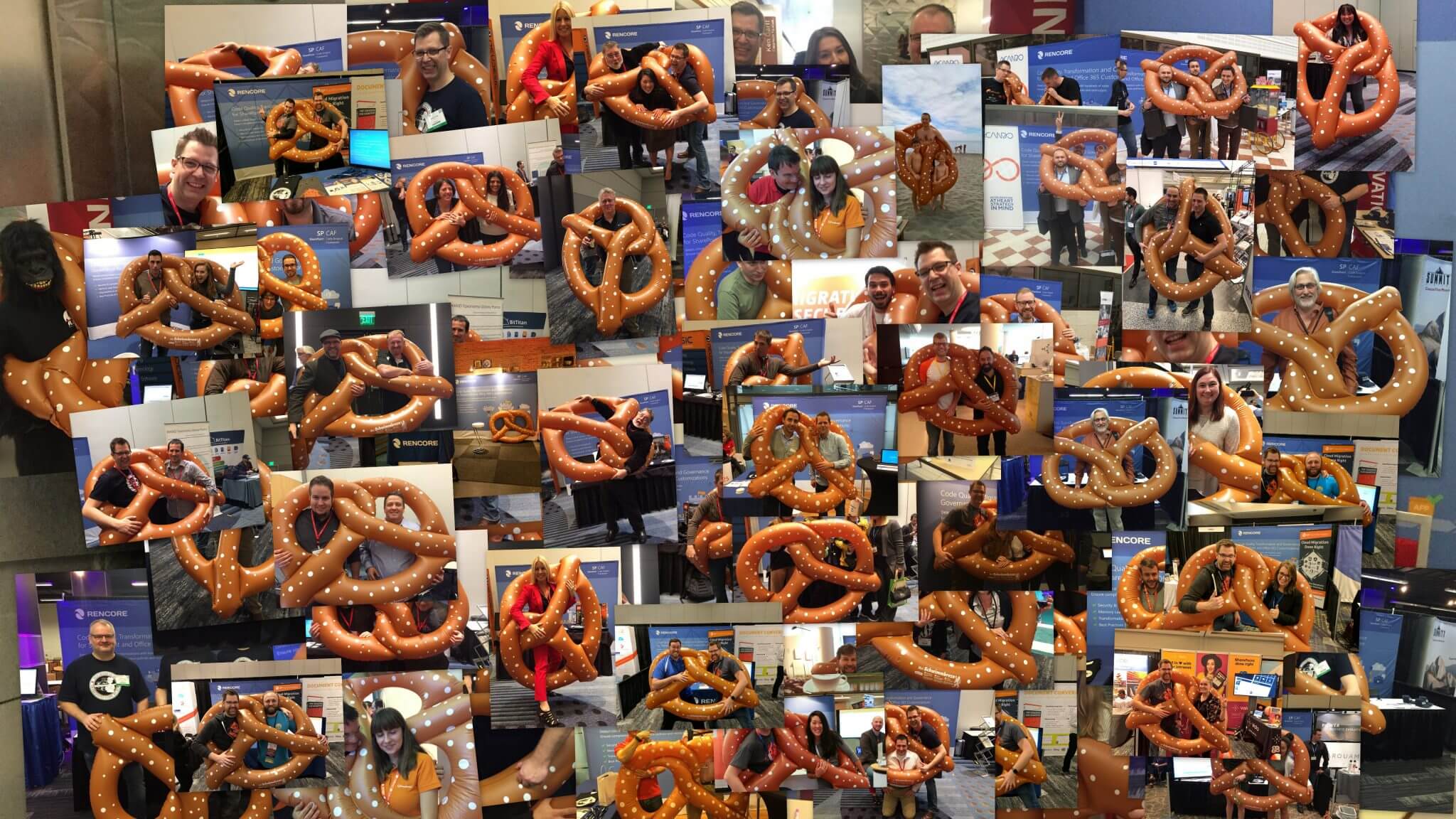 Maybe you, the readers can reach out and tell us where you first saw the pretzel? Otherwise, we might just let the legend build! 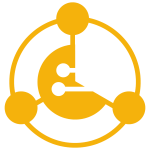 Microsoft Ignite is arguably one of the biggest software events in the calendar year, and it’s the perfect platform for Microsoft partners to showcase their newest developments to all interested stakeholders. In September 2017, Rencore headed out to Microsoft Ignite in Orlando, Florida armed with a strong team presence, a stylish booth and our great suite of products. Furthermore, some of our MVPs led sessions which were well received. You can catch up by reviewing this blog post from last year. 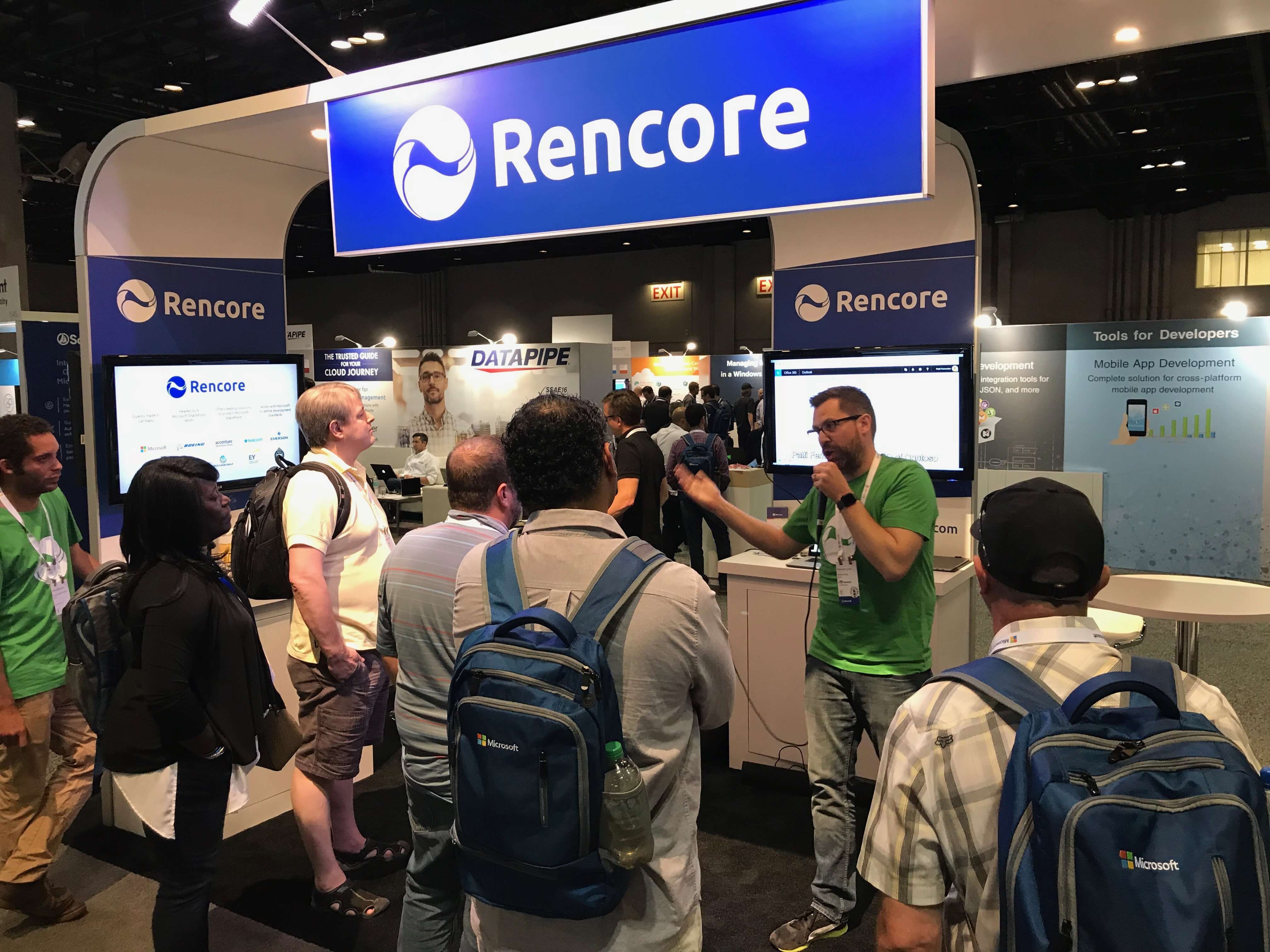 Microsoft Ignite was also a significant milestone, why? AnalysisCloud was first featured! It completed our trilogy of software products by offering a solution to cloud governance and security. The premise is that AnalysisCloud patrols the cloud space 24-hours a day. It monitors evolving governance policies and helps you keep your environment healthy, secure, and your data where it is supposed to be – in your hands. 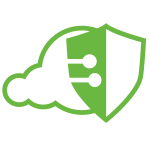 A few of our colleagues have become parents for the first, second or third time – in some cases, within the past 8 months. Out of our team of 25, three members have welcomed new editions and a couple more are expected in the next months. They have joined or will join the new generation of Rencorites – don’t worry we’re not a religious sect! Each edition is warmly welcomed with lovely gifts, and importantly, the kind words and affection from all our team. Rencore regards ‘family’ as a core value, and therefore family time is high up on the list. And finally, just in time for our five-year anniversary, we welcomed Liam Cleary, MVP and renowned security expert in June 2018. He joined our other four MVPs as Product Owner – Security. It’s truly exciting to have Liam onboard not only for his expertise which complements our business approach towards SharePoint customizations, but equally importantly he’s a fantastic guy who matches our team ethos.

So, without further ado, I will enter the doors of our brand new office and join my colleagues, family, and friends in celebrating the place I have called home for the past twelve months! Watch this space or social media for more photos and fun!

If you are in Munich, come and say hi like these guys did! Thanks for attending our tutorial led by Waldek and Erwin. 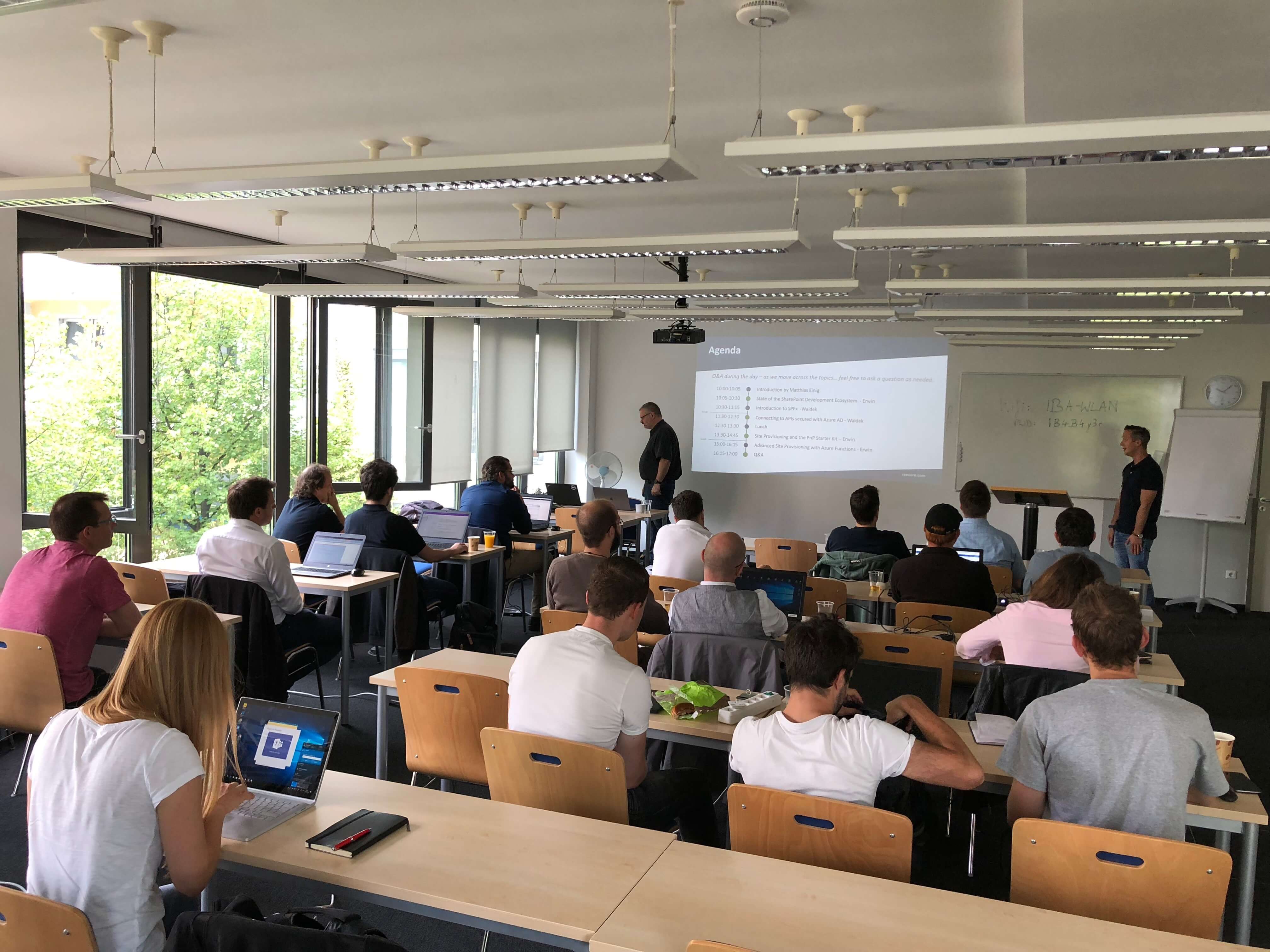